An importer of the country's favourite fruit is calling on other primary sector importers to support ethical producers.

Nearly all bananas sold in New Zealand come from overseas plantations, some of which have come under fire for environmental harm and mistreatment of workers. 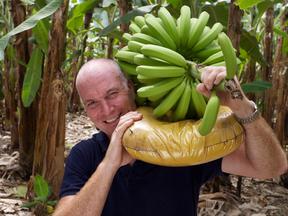 Auckland-based All Good imports about 100 tonnes of the fruit each week from a fair trade certified plantation in Ecuador.

Co-founder Simon Coley said it was aiming to offset the carbon costs of growing and shipping the produce and hoped other companies would do the same.

"Bananas are prolific, they're often the first thing you see when you walk into a supermarket.

"Buying a bunch of carbon-zero bananas isn't going to change the world but it's a small act that adds up to a lot, given the amount of consumption of bananas there is, so we think the challenge is for everyone to do this," Coley said.

He hoped their business model would show other companies that a more ethical approach was possible, as demand for fair trade and more environmentally friendly produce was growing.

Coley said the company only sold about a third of its first shipment of fair trade bananas in 2010 but that changed fairly quickly and it now supplies from 7 to 9 percent of the New Zealand market.

"Over the first two or three months we saw that we had less wastage, that more people got on to it and understood why we were doing it."

Most overseas banana plantations grow the Cavendish variety, after the last popular variety was almost destroyed by a fungal disease in the 1950s.

However, Cavendish bananas were also vulnerable to disease - a newer strain had wreaked havoc on plantations across four continents and more recently in Latin America.

Coley said there were concerns that another blight could push Cavendish bananas to the edge of extinction, but a solution was biodiversity.

"You really do need to have a way of isolating farms, of not having large intense growing, being able to make sure these plants are healthy and robust and just [have] good horticultural care," Coley said.

He said the spectre of blight had always haunted the banana industry and most companies were constantly trying to develop better ways to manage disease.

Coley said fair trade plantations should help to do this, as it allows growers more time and money to invest in better practices.