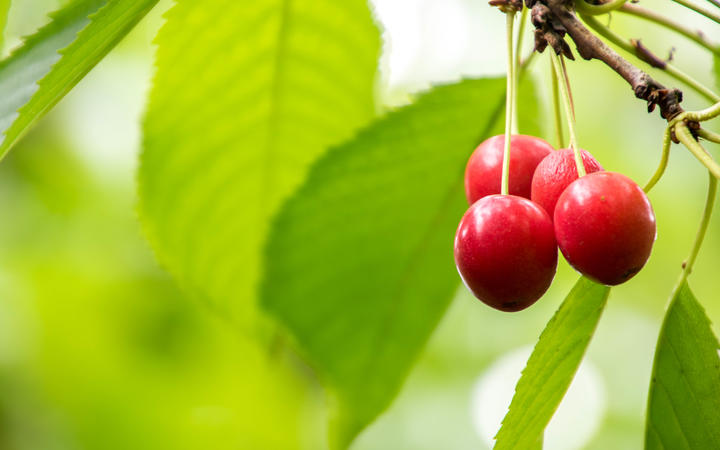 Many growers have relied on backpackers on working holidays and tourists who pick their own cherries. Photo: 123RF

In the run-up to Christmas, orchards hope to entice local labour with free food and higher wages.

But the growers fear that won't be enough to secure the several thousand people needed during the busiest picking time.

Tim Jones, who runs 45 South Cherries in Central Otago, said it was currently early in the cherry harvest so demand for workers hadn't soared and local labour was available.

"The first few early domestic season cherries are being picked now," he said.

"We have to say that we're very encouraged by the amount of enquires we've had from all the Kiwis, school students and university students that have inquired about work and also the backpackers that are still remaining in New Zealand."

Jones said the pressure would come during the peak of the harvest in January.

"We do need an excess of 5000 people in Central Otago to pick and pack the cherry crop and that's where our nervousness is."

"Will it truly be enough people at that time?"

However, that looks unlikely. Prime Minister Jacinda Ardern has already told the horticulture sector that the government isn't looking at bringing in more seasonal workers visas this year.

"What we have said to them though, is that this side of Christmas we have to focus on [returning] New Zealanders," she said.

Martin Milne, owner of Cheeki Cherries in Cromwell, has relied on backpackers on working holidays and tourists who pick their own cherries.

But with the borders closed and a limited number of visitors left in the country, Milne said orchards would be paying more to entice workers.

"No for sure, they [workers] are going to get some more money this year," Milne said.

"Some of them are doing incentives to keep them in the orchard. Last year they gave out free ice creams ... order 50 pizzas from Pizza Hut and feed all the staff pretty well, always throwing on some beers."

Milne is still working out how much more he will pay workers, but said in previous years, good pickers can earn between $300-to-$400 a day.

"Fruit growing in Central Otago is one of the big parts of their export earning. If you lose a third of the crop, call it $50 million worth of cherries, you know that has a massive flow through to the rest of the regional economy and importantly to permanent New Zealand jobs," he said.

A spokesperson for Immigration Minister Kris Faafoi said progress was being made with growers and an announcement should be made in the near future.