Farmers around Auckland's southern border are finding themselves unable to check their stock, and having to drive vast distances to get feed and equipment. 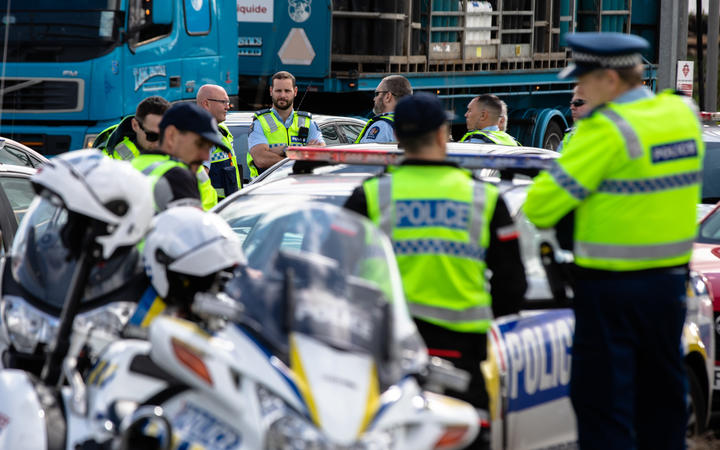 Police gather near the intersection of SH1 and Mill Rd, Bombay, prior to setting up a Covid-19 roadblock. Photo: RNZ / Dan Cook

They're calling on the government make them exempt from the border rules, or move the border further south.

Howard Francis lives and runs a glass business in Auckland, but has a small farm at Maungatawhiri in Waikato, which he visits regularly to check on the animals.

Now he's unable to get to them, and he has traps set for feral pigs which he can't check.

"For all I know - I've not been able to get there since Sunday - I could have a pig's leg caught in a trap or something," he said.

For the first few days of alert level 3, Francis was able to use essential worker status related to his glass business to cross the border.

But when stopped at a checkpoint on Monday, he was told in no uncertain terms to turn around, despite being almost at his property.

"I've been holding out thinking an exemption would come in the next day, two days. But it's Thursday now and we applied on Sunday. I'd be a lot happier if I knew I could at least go down at the weekend, check up on everything and make sure they're okay."

Peter Blanchard has his racing horse stables in Pukekohe on the Auckland side, but his spelling block - where the horses can roam freely in the paddocks - is in Tuakau, on the Waikato side.

"Went out on Sunday, had no problem getting out through the roadblock, showed them from letter Harness Racing New Zealand that we had in place from when the level 4 lockdown was on," he said.

"I came back a different route and the policeman stopped me, I showed him the letter and he said, 'That won't cut the mustard I'm afraid'. He said, 'You'll have to have a letter from the Ministry of Health'. So that was Sunday and I haven't been to check them again."

He's asked neighbours to the Tuakau property to check on the horses.

Brad Carsons has a small cattle and horse farm about 500 metres south of the Pukekohe checkpoint, where he also runs an equine supply business.

"We're a stone's throw away ... from Farmlands, from RD1, from PGG Wrightson and essentially we can't get there to do anything and we've got to either travel to Huntly for stuff for the calves or travel further to somewhere like Cambridge to get stuff for horses," he said.

"I've got a horse with a small injury that needs an operation ASAP, but I don't know if I can get to my normal vet in Karaka to drop that horse off or if I'm going to be turned around at a checkpoint."

"Stock needs to be looked after properly and under the current rules they can't be. The government needs to issue an exemption."

He said the Waikato River would have been a more logical border.

"Where the government put the the border splits Pukekohe and Bombay, which are in Auckland, from Tuakau and Pokeno, which are in Waikato.

"However, those four places are absolutely intwined. People live and work in all of those places, so we've basically put a dividing line between mum and dad and the two kids."

Bayly has written to the government asking for a blanket exemption for the sheep, beef, equine, poultry and bee industries.