Ngāti Whātua representatives assisting police at the Auckland checkpoints are confident people aren't slipping through with border controls significantly tightened up in the last few days. 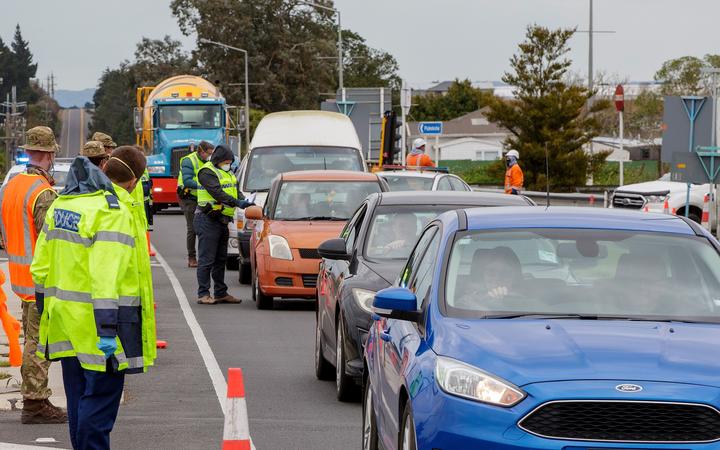 A Covid-19 checkpoint set up at the southern boundary of Auckland. Photo: AFP

It comes after concerns were raised by Te Tai Tokerau border control, which managed iwi checkpoints in the Far North during the last lockdown, about the high number of vehicles that were coming into the region from Auckland.

Te Rūnanga o Ngāti Whātua chief operations officer Antony Thompson said while there were "slippages" from Wednesday to Friday while the checkpoints were still getting set up, that was no longer happening.

He said that people must have an exemption form approved by the Ministry of Health in order to get through.

"If they don't, they'll be turned around."

"We understand that there are tangi and other things happening in the north that people want to get to but, at the same time, if you're not an essential service worker or you don't have the Ministry of Health exemption paperwork, then you're not going to get through the checkpoint."

The iwi were using their marae, Te Hana, as a place to help educate those whānau trying to get up north on what the level three rules are, and why they are important.

"We need to educate everybody to let them know, that if you do try to get through to the checkpoints and are turned away - don't be disheartened, and don't take any offence."

He said there were a number of "upset people" who had been turned back, including a contingent of over 50 people in various vehicles trying to head up north for a tangi.

Ngāti Hine Pita Tipene is confident the border measures in place are stringent enough, as almost no one came from Auckland for a significant tangi in Mōtatau on Friday.

"Many people either chose not to come north, which was very sad in terms of the grieving process, and others that tried to come through were turned back - the only one who made it through, as far as I can see, is the bishop who was conducting the service," Tipene said.

Tipene said the iwi would consider reinstating the Waiomio Valley checkpoint if there was community transmission in Te Tai Tokerau.

"There is a lot of fear out in the community amongst the people because when those positive testing were found last Monday, no body knows in terms of community transmission, whose been up here in the North," Tipene said.

"We just don't know where it is, which is the fear... we're getting ready for the worst and hoping for the best."