By Rob Stock of 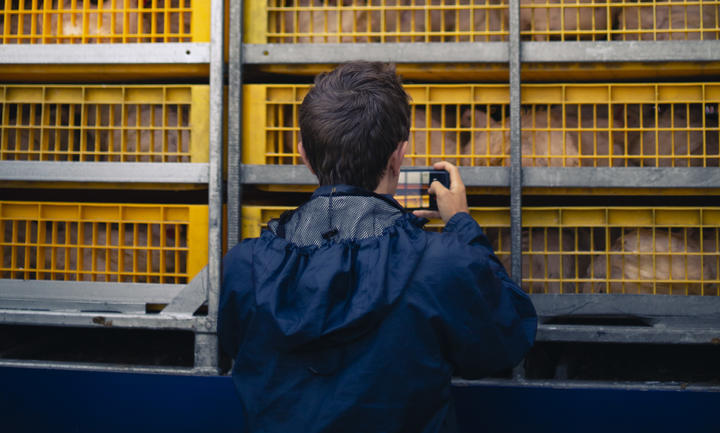 British supermarket giant Tesco now even requires slaughterhouses and live animal transporters in its global supply chain to cover the whole process with CCTV to ensure animals are treated humanely.

Activists say they would not miss an opportunity to highlight mistreatment of animals, and where possible, present video evidence to the public.

"We'd tell the public because the public have a right to know, and the animals have a right to have their stories told," says Anna Rippon, a vegan activist for Direct Action Everywhere New Zealand, which pledges not to stop its activism "until every animal is free".

Video, photographs and lobbying from animal advocates in piggeries, chicken farms, live animal exports, and in the dairy industry, have all brought about improvements in animal welfare.

"They've got their own motivations," says Sirma Karapeeva, chief executive of the Meat Industry Association.

"We do take the issue very seriously, and we do focus on maintaining the high level of welfare in both the farming and the meat processing sector, so animals are well cared for," Karapeeva says.

The threat of animal welfare exposes by activists is a motivating factor behind industry self-regulation, like Beef and Lamb New Zealand's Farm Assurance programme, says Dave Harrison, the organisation's general manager of policy and advocacy.

"In the next three or four years, we will have all farms participating under that programme, and every three years they will be audited independently ... testing their compliance with animal welfare standards," he says.

Revelations of poor animal welfare could impact the reputation of their entire country's industry, he says.

"Even if it's another sector which experiences an issue, or has one of these minority case, it does have a potential flow on effect."

Failure to convince more animal-friendly countries that New Zealand standards are not high enough is a real threat of non-tariff barriers to trade.

"I met with the European ambassadors this afternoon. Their 'farm to fork' strategy absolutely focused on animal welfare," O'Connor said on 23 July at a political panel organised by animal rights activists from Safe.

"The consumer pushback on that area is first and foremost even before climate change," O'Connor said.

"We can't produce food in this country without the highest standards of animal welfare, or they will block it.

"We can't have sustainable production systems in farming unless we have really high animal welfare standards."

The EU's farm to fork programme sets animal welfare as a key priority.

"It is also clear that citizens want this."

The European Commission will revise the trade block's animal welfare legislation, including on animal transport and the slaughter of animals, to align it with the latest scientific evidence, broaden its scope, make it easier to enforce.

While New Zealand animal welfare laws earn the country a relatively high place in the international Animal Protection Index, New Zealand has been criticised for failures in animal welfare enforcement, with Green MP Gareth Hughes saying the Ministry of Primary industries had roughly one welfare inspector for every 5.3 million production animals.

"We are not resourcing animal welfare monitoring enough in many respects. We have outsourced it to animal activist groups," Hughes says, who is to leave Parliament after the election.

"We need to go further," he says, and is advocating for the establishment of a crown entity dedicated to animal welfare, overseen by a minister of animal welfare.

Vegan Michael Morris from Direct Action Everywhere says Britain, some Scandinavian, and some EU countries have moved ahead as we have stood still.

Despite that, New Zealand still compares well to most of the rest of the world on animal welfare, Karapeeva says, with cows and sheep largely leading pastoral existences, rather than being factory farmed.

"[But] We are facing a great deal of scrutiny from our consumers and our trading partners, and our access to many of those key markets depends on our performance to those very high standards," she says.

Even if the farm to fork programme did not block access for New Zealand exports, it could result in food labelling to better inform the consuming public within the EU about the animal welfare credentials of the meat they are buying.

"The commission will also consider options for animal welfare labelling to better transmit value through the food chain," the foundation document says.

However, "EU trade policy should contribute to enhance cooperation with and to obtain ambitious commitments from third countries in key areas such as animal welfare.

"I think transparency and visibility is the way things are heading," Henderson says.

"It might not be the case in China perhaps, but it is the case in economies like Europe and the UK," he says.

It is these markets that will set the expectations for New Zealand meat industry, he says.

Morris says government historical focus for animal welfare is "a market access issue" rather than being a matter of real concern for animals.

In 2015, the associate minister for primary industries Nathan Guy said: "New Zealand earns around $25 billion a year by exporting animal products such as meat, milk and wool. Our global reputation as a safe food producer depends on us continuing to produce animal products within strong animal welfare standards."

In 2003, agriculture minister Jim Sutton said: "The tomtoms are beating in Europe with concerns about our animal welfare and environmental standards."

"As the pressure goes on European farmers to change their decades-old reliance on export subsidies and the like, they will search for other ways to keep us out of what they think should be exclusively their markets," he said.

"They will start applying more and more pressure on us to meet nitpickingly high standards in non-trade areas."

Exporters had to demonstrate to retailers and consumers that their products met their expectations for animal welfare standards, though Sutton acknowledged a town versus country divide in attitudes.

"It is not hard to drum up sympathy for chickens, pigs, and other food animals in societies where the mainly urban populations are significantly divorced from and ignorant of the realities about where their food comes from," he said.

"When you are brought up with bunny rabbits running round the edge of your porridge plate, weaned on Peter Rabbit stories, and grow up to Watership Down, you are not instinctively a support of rabbit pest management strategies."

"It is in New Zealand's wider trade interests to continue to position ourselves as having progressive animal welfare policies and to actively participate in international fora," Sutton said.

- This article originally appeared on [ https://www.stuff.co.nz/ Stuff] and is republished with permission.