By Luke Sole of

After the collapse of the Soviet bloc, Cuba embarked on a rapid reorientation of its agricultural system to a self-sustaining, biointensive and essentially organic model. Nearly 30 years on, a Canterbury vegetable grower ponders whether Aotearoa could follow its lead. 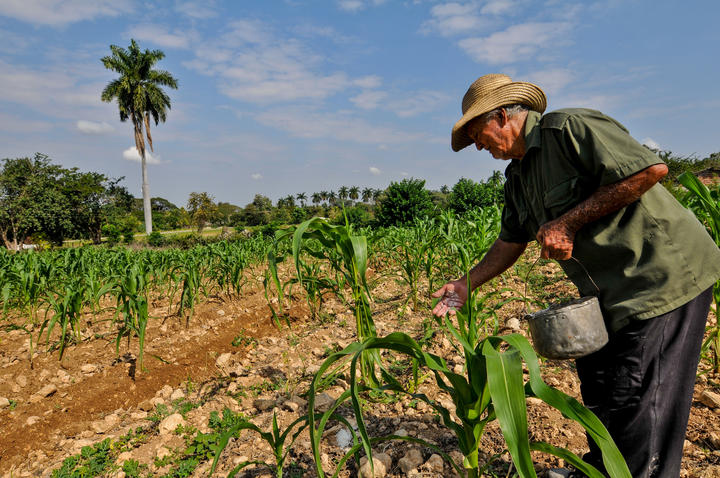 It's November 2016, less than a week after the election of Donald Trump, and I'm travelling the backroads of Cuba's Villa Clara Province with my wife and our then one-year-old son.

The area is home to thousands of hectares of citrus orchards. As we traverse dusty backroads in the pink late afternoon sun, orange trees spread out as far as we can see. The orchards are densely spaced and separated by wide dirt rows, designed especially for mechanised harvesting.

These days the surrounding roads are quiet, except the odd group of local horticultural workers sporting the ubiquitous olive fatigues sheltering under sprawling palms that flank the roadsides. On one empty stretch, an ancient army transporter rolls past towing an artillery cannon.

A little further on, we pass a worn billboard depicting an image of Vladimir Lenin with an inscription thanking the Soviet Union for its investment in Cuban agriculture. Behind the billboard, a towering grey concrete processing plant is overgrown and abandoned.

This is the type of image that western tourists post on Instagram as some form of précis of Cuba's failures and perceived unsophistication. These are also physical reminders of a now obsolete agriculture model characterised by intensive production and monoculture cropping. 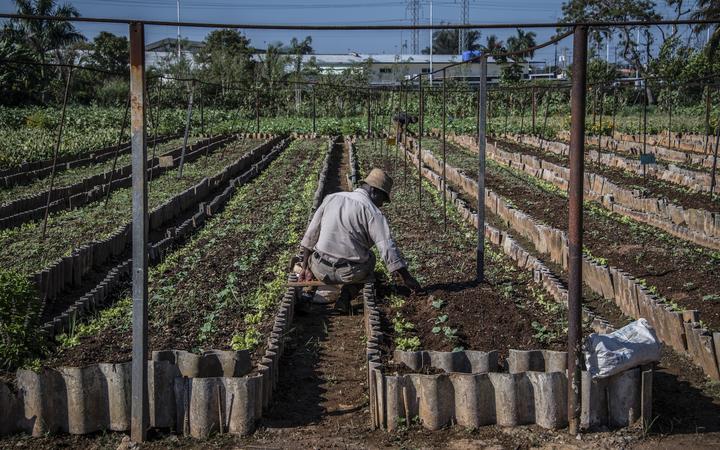 A farmer works at a suburban agriculture farm in Cerro Municipality in Havana, in 2017. Photo: ADALBERTO ROQUE / AFP

It was an input-heavy "bigger is better" philosophy that aimed for the maximum yield possible at the expense of sustainability, biodiversity and soil health. It's an approach that isn't dissimilar to methods traditionally used in New Zealand, except in Villa Clara the machines are long gone, and the dirt rows lay empty.

The results were immediately apparent. Cuba posted the worst growth in per-capita food production in Latin America and the Caribbean. Sensing opportunity, the US government doubled down by imposing tougher sanctions and it seemed like Cuba was unlikely to recover.

But remarkably, at what seemed like the eleventh hour, the island embarked on a rapid reorientation of its agricultural system. The solution was to establish a self-sustaining, biointensive system of agriculture that removed almost all inputs, and as a consequence was essentially organic.

The subsequent decades haven't been all plain sailing though. The fraught Período Especial was a prolonged economic crisis that began in 1991 and lasted until the early 2000s when Cuba was able to establish critical trade relationships with countries such as Canada and Venezuela. At the same time, the burgeoning state-sanctioned tourism industry was beginning to reduce Cuba's dependence on traditional exports such as sugar. 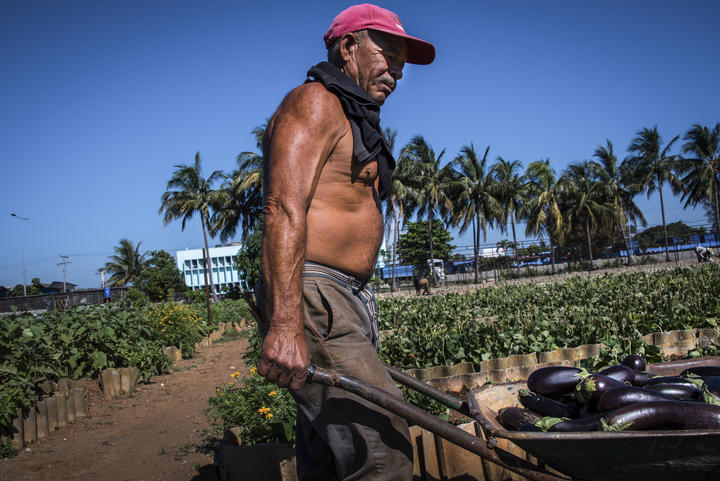 Cuba's modern achievements in agriculture are remarkable by any metric - with 383,000 small-plot farms, covering 50,000 hectares of otherwise unused land, producing more than 1.5 million tons of vegetables. Top small-plot farmers can reach a yield of 20kg/m² per year of edible plant material using no synthetic inputs - equivalent to a hundred tons per hectare.

According to May Ling Chan and Eduardo Francisco Freyre Roach's Unfinished Puzzle: Cuban Agriculture - The Challenges, Lessons and Opportunities, small-plot and urban farms now supply 70% or more of all the fresh vegetables consumed in cities such as Havana and Santa Clara.

Cuba is fortunate enough to have some advantages on its side, including high rainfall and a mostly semi-tropical or temperate climate. But Cuba isn't an oasis. Like New Zealand, it's a small island nation: mountainous, with huge patches of unproductive land.

Without the use of herbicides, Cuban farmers initially struggled to maintain pasture and production areas. Land that was previously used for monoculture crops was quickly recolonised by weeds. Marabú, a thorny invasive legume, which isn't too dissimilar to gorse, covers approximately two million hectares, or around 18% of Cuba's territory.

These issues were largely overcome by targeted government investment and incentives to bring willing workers to the provinces. The growth of urban farming in the cities offset losses elsewhere and allowed land that was too difficult to farm to be reforested, planted in less labour-intensive perennial crops, or left fallow.

But the big question for everyone with an interest in regenerative agriculture is this: could Cuba's example be replicated in other countries without the required numbers of ready workers in the primary sector?

The answer for now at least is no, but there are options.

Cuba's ministry of agriculture incentivises entry by providing would-be farmers with plots of land on free or heavily subsidised long-term leases. Some of these farms fail catastrophically, but others go on to be a source of employment in often isolated communities with little economic prospects. The Cuban ministry of agriculture has created over 2600 new small urban and suburban farms, and the distribution of the use rights to the majority of estimated three million hectares of land previously in state ownership. 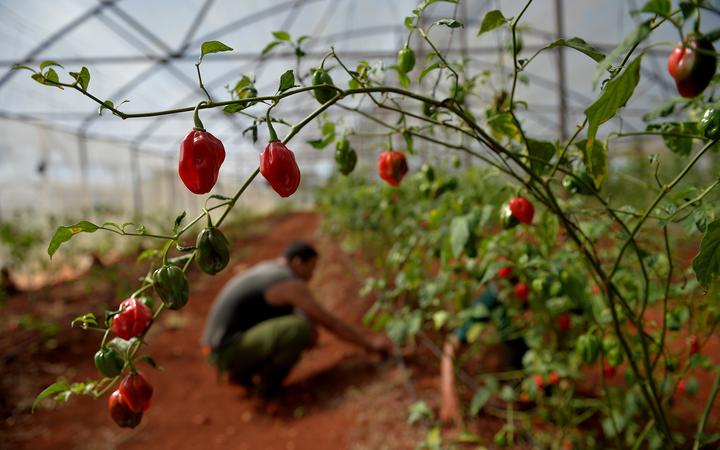 A farmer works on the chili peppers' harvest at a greenhouse of the state-owned citrus company "Ceiba", in Artemisa. Photo: YAMIL LAGE / AFP

If that sounds unfeasible in New Zealand, think again. In 1975, the then Kirk-Labour government launched the Ohu scheme. It aimed to boost organic farming, alternative energy and recycling by drawing inspiration from Māori farming models and the Israeli-style kibbutz.

Ever the pragmatist, Kirk believed the scheme was essentially a practical outlet for those who had effectively dropped out of the conventional labour market. The land offered was often poor quality and remote. From the beginning, numerous challenges presented, including lengthy negotiations over ownership with Lands & Survey, and struggles with local authorities over building permits. Nonetheless, around eight Ohu were established.

As for the urban farming revolution?

The explosion of urban agriculture in European cities hasn't gone unnoticed in New Zealand. Urban planners are increasingly seeing agricultural spaces as a key component of socially connected cities. This covers everything from local community gardens to high-tech vertical or even underground farms. Dr Clive Cornford from the Manukau Institute of Technology (MIT) argues that urban agriculture is not only important for human wellbeing, but it's an essential measure to create food security and community resilience in the face of climate uncertainty.

On my last day in Cuba, I met Dr Eduardo Francisco Freyre Roach, a professor in rural sociology, sustainable agriculture and bioethics at the Agrarian University of Havana (UNAH) and coauthor of 2012's Unfinished Puzzle, the book mentioned above.

His reluctant advice for New Zealand in the face of climate challenges?

"Perhaps it's time to look outside of the so-called first world for solutions and focus on cultural strength and empowerment. Capitalism doesn't have all the answers. Neither do we, but we're trying our best."