Energy consultant Phil Stevens is converting old logs and tree trimmings into a special ingredient that sequesters carbon and enhances the soil and water on his Manawatu lifestyle block. 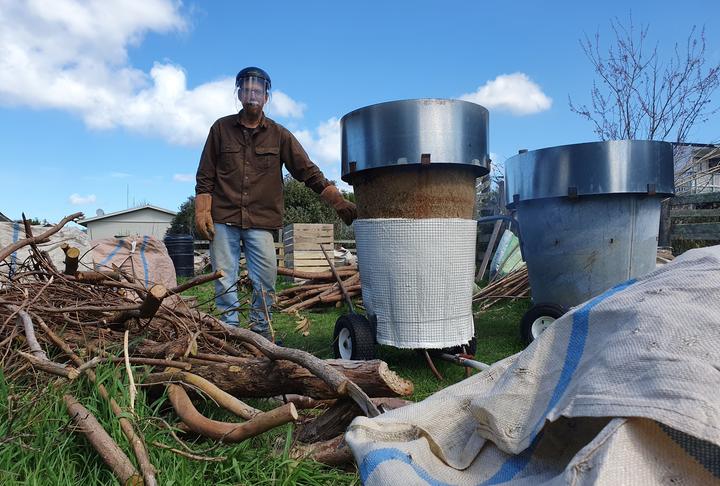 Phil Stevens has a couple of purpose built kilns on his lifestyle block for making biochar Photo: RNZ/Sally Round

"I'm the guy you see on the side of the road grabbing the branch that blew off in last night's windstorm," Phil says.

He jokes about being a hoarder of old bits of wood and branches to feed his passion for making biochar – a type of charcoal which some are calling 'black gold'.

The former IT consultant from Arizona wanted to reduce his carbon footprint and started researching the carbon cycle, finding a way to harvest and sequester carbon in his own backyard.

Phil holds workshops to spread the word about the ingredient which, when added to soil, improves its qualities, aerating it, holding moisture and acting as a filter near waterways.

"I know quite a few people who are really into this stuff and we joke about being sort of fringe types, being a little bit nutty about it," he says as he feeds his kiln, set amid neat piles of graded wood matter.

Phil is making as much biochar as he can and using it in small scale no-till cultivation on his lifestyle block where he grows vegetables and fruit trees.

"I'm all about carbon farming, trying to get more carbon into the soil not out into the atmosphere." 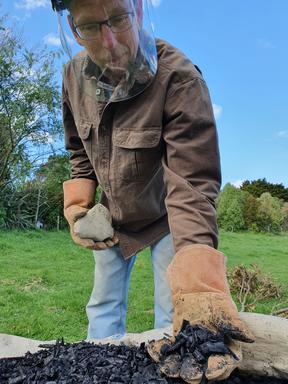 Fertile soils with high carbon content were found to have developed in the Amazon lowlands where for centuries people living there had been burning their refuse and burying it in pits.

New Zealand lags way behind other countries in research and use of biochar, Phil says.

In Australia, tests are underway to see if ruminant animals fed it as a supplement have reduced emissions.

Phil's own chickens gather around to peck up the bits when he cooks it up in his paddock.

As a smell-reducing additive to the chook house, it's also made clean-outs a lot more pleasant, he says.

With the race on to reduce carbon emissions, biochar is a good tool in the toolkit, Phil says, but at the moment in New Zealand, not enough is being produced.

He'd like to see farmers using it to help manage the land sustainably.

Mobile kilns could be rolled out to logging sites and rubbish tips around the country to deal with mountains of forestry slash and green waste, he says.