Farm animals are suffering in muddy, confined spaces, with many people ignoring the problem and officials unsure of what to do about it, a hard- hitting report has found. 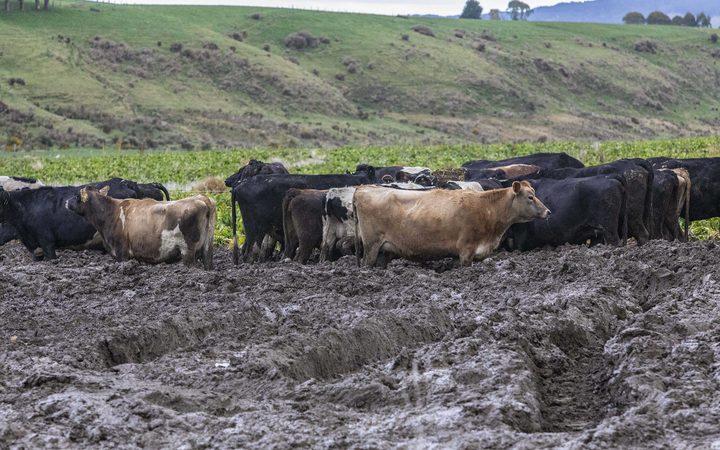 The comments came in a report by a special taskforce on winter grazing.

The report was ordered by the government after animal rights activists released pictures of large numbers of cows wallowing in mud after being confined in a restricted area, which was soon trampled into a quagmire.

The activists said this was cruel and cited cases of cows giving birth to calves while standing knee deep in mud.

Farm groups said the pictures were taken out of context and most winter grazing was not like this.

Intensive winter grazing is used so that grass on the main part of the farm can recover at a time when pasture growth is limited by cool temperatures and short daylight hours.

The animals are then fed crops or other food in a confined area.

The report said this could cause serious harm to animal welfare, but it admitted it did not know how extensive the problem was.

"However there is no objective measurement."

The taskforce added getting rid of winter grazing was not a sure fix either, since animals kept on their usual paddocks could be exposed to winter storms and suffer a lack of nutrition from slow-growing grass.

It wanted an urgent study to be undertaken to understand winter grazing better.

People needed to become more sensitive to the problem.

"The widespread prevalence of poor intensive winter grazing practices leads to people 'walking past' or being desensitized to poor practice and considering it as normal," the report said.

And there were further problems, even when people cared about animal welfare.

"Detection and reporting of poor performance does not appear to be happening to any great degree," it went on.

"It may be hindered by parties feeling uncomfortable, a lack of understanding that complaints are anonymous, an unwillingness to report on clients or neighbours, or not knowing how to or when to report what they see."

The report was even more critical of how officials were dealing with this, saying not all compliance tools available were being used and enforcement activity was hindered by a lack of clear rules.

Further enforcement tools were needed, and above all, codes of welfare needed to be aligned with emerging scientific understandings of animals' sensitivity.

The taskforce said animals themselves were being taken for granted.

"Cows can handle a lot, but in some ways this hasn't done them any favours," the report said.

"Just because they are stoic doesn't mean their welfare isn't affected. We need to remember the cow underneath."

There had to be several changes, which included making sure cows can lie on dry ground, have access to shelter, have continuous clean water and a balanced diet.

Animal welfare had to be taken into account as an intrinsic part of all farm management decisions.

There should be a clear set of animal welfare benchmarks for all people caring for livestock, and regulators needed to set and operate against clear bottom lines, and make sure that they were met.

Above all, the Ministry for Primary Industries had to take steps to implement tighter rules immediately, in order to drive change for next winter.