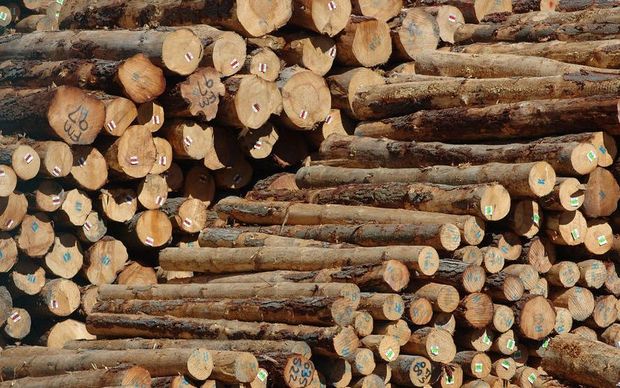 A pile of Pinus radiata logs waits for export at the port in Lyttelton. Photo: 123rf

Volumes of log sales are still well down, but prices have inched up slightly, though to nothing like what they were.

Some foresters think the industry is through the worst, but for many, there is still a long way to go.

That in turn led to exporters here sending fewer logs abroad, and forestry crews not cutting down trees in the first place.

At the time, the price fall in China was estimated at 15 percent, but has since been revised to 25 percent.

Forest Owners Association chief executive David Rhodes said there had been a marginal recovery in prices since then.

"(The market) does appear to have stabilised and has possibly slightly improved a bit, but clearly it is down from the highs of earlier in the year and the amount of harvesting has responded to that (fall)," Mr Rhodes said.

The problem in China was blamed on three things.

One was economic nervousness and a lower currency stemming from China's trade war with the United States.

Another was a glut in supplies of wood from Europe, as foresters there cut down trees in advance of the spread of a noxious pest through the continent.

A third reason stemmed from China's Belt and Road policy.

That saw 30 trains leaving the city of Chongqing alone, each week, laden with goods for the German city of Duisberg.

To make the journey more economic, those wagons were packed with logs for the return trip, which crowded out New Zealand sales.

"Everybody's affected in different ways and it really depends on who you are harvesting for, how much capital you have got exposed, or whether you have just made recent investments, so every situation is different.

"Certainly we have had a cut back, particularly among the smaller growers."

Mr Rhodes said that was because larger producers had made a decision to keep on working and to retaining staff, but smaller forest owners with only one chance to harvest their trees were likely to delay cutting down those trees until prices got better.

He said a survey of forest contractors found a mix of business as usual, reduced work hours and capped production.

He added it was very hard to say where the industry went from here.

But for now though, it appeared to have moved beyond the bottom of the market.