New Zealand scientists trialling a potentially environmentally sustainable grass in the United States hope to study its effects on animals in the next two years. 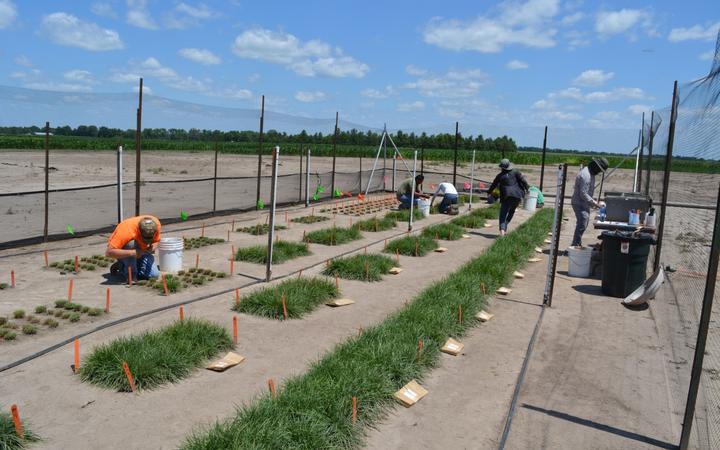 The genetically modified ryegrass has been developed by the Crown Research Institute, AgResearch, at its grasslands centre in Palmerston North.

Modelling has found it can grow up to 50 percent faster than conventional ryegrass, it is more resistant to drought and could reduce methane emissions from animals.

Trials are now progressing in the mid-west of the US, where genetically modified organisms can be field tested outside of the lab.

AgResearch's principal scientist, Greg Bryan, said at the moment it was focused on the breeding process, which involved choosing the best performing plants that would be used for future seed production.

"The High Metabolisable Energy ryegrass has performed well in controlled growing conditions and I've recently returned from the United States where we are growing the plants in field trials in competition with one-another, just as they would in pasture and the plants are doing well," Greg Bryan said.

Dr Bryan said the ultimate goal of the United States phase of the research was to conduct realistic, rather than simulated, animal nutrition studies.

This would allow AgResearch to evaluate whether the grass might have the potential environmental benefits such as reduced methane emissions and reduced nitrogen excretion that modelling suggests it will, he said.

Dr Bryan said about a hectare of grass would be needed for an animal nutrition study, which he hoped could get underway by the end of 2021.

"It's important to stress that the forecast environmental benefits associated with the grass need to be supported by rigorous research."