The Ōamaru vet, whose efforts led to the identification of cattle disease Mycoplasma Bovis in New Zealand, says she is optimistic the disease can be eradicated.

Earlier this week, Dr Merlyn Hay was given the Outstanding Contribution to the Primary Industries Award, for her work to identify M Bovis in July 2017.

Dr Hay told Saturday Morning that the disease was very hard to diagnose, and in many other countries it was only detected after it had already been spreading for several decades.

It's believed M Bovis had only been in New Zealand for 18 months when Dr Hay identified it, and she said she hoped that meant it could be eradicated.

"It's one of those things that we don't know unless we try, it's never ever been done before and we have an opportunity to try in this situation. I'm very hopeful, like what everyone is, that it can be achieved."

Last year, the government announced that it would try to eradicate the disease.

Dr Hay said she was initially called out to look at some cows that had unexpectedly become lame.

Usually lameness occurred because of trauma, but there was no signs of it on these cows, she said.

"So I felt right from the start that we were dealing with an infection."

She took some samples to test, but they came back with no signs of infection, which Dr Hay said was confusing.

She said despite only five or six cows being infected in the first week from the same farm of about 1200 animals, she was determined to continue following it up. 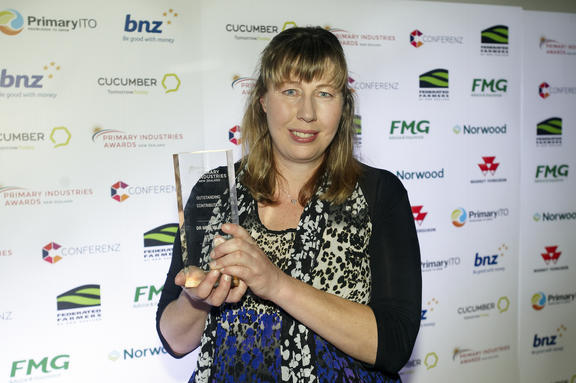 "We were all recognising it as unusual and each animal as an individual on these farms is valued, so we were very anxious to find out what was going on even in the first week."

When one of the cows had to be euthanized because it was not responding to treatment, Dr Hay conducted further tests and a dissection.

"Despite the fact we were getting negative cultures back, we did feel there must be an infectious agent involved."

Dr Hay's nominator said there was no doubt her detection had meant New Zealand had a good chance of eradicating M bovis.

What made Dr Hay's work remarkable was the fact M Bovis had previously not been found in New Zealand and was not among the high profile diseases vets are expected to keep an eye out for, they said.

"If Dr Hay had not been so tenacious and vigilant and it had been months or years later before Mycoplasma Bovis was first detected it is highly likely we would just have had to live with the disease as farmers in other countries do.

"Arguably, Dr Hay has saved the New Zealand primary sector millions of dollars and potentially enabled our country to achieve something no other country has managed - to rid itself of this disease."