By Carol Stiles, with additional reporting from Maja Burry

A wet winter could lead to a vegetable shortage over winter, warns one of New Zealand's major growers. 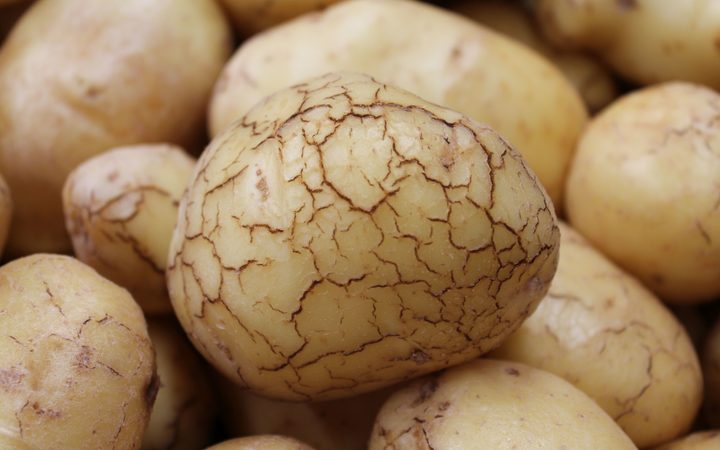 Some water-damaged potatoes appear to be bursting out of their skins. Photo: RNZ / Carol Stiles

AS Wilcox grows up to 30,000 tonnes of potatoes a year, similar volumes of onions and 5000 tonnes of carrots on farms in Northland, South Auckland, Waikato, Ohakune and Canterbury.

General manager for supply Brent Wilcox said continuous rain stopped the ground from drying out and that had impacted vegetable quality.

"Crops become very waterlogged, so they start to deteriorate in terms of their skin finish and cosmetic appeal, but also it starts to take it's toll in terms of rots. So the recovering levels are a lot lower than what we would have hoped for," he said.

"If you look right at the front-end of the winter we were probably looking at about 80 percent recovery in most lines, and now some of our lines are under 50 percent in terms of recoverable quality."

Some water-damaged potatoes looked as though they were bursting out of their skins, Mr Wilcox said.

The wet ground was very hard to work with - a few tractors had got stuck and some work had to be delayed, he said.

"Usually when you have late planting the crops don't mature and yield as productive as they could do because their season has been short-tailed some level, so we'd expect crop yields to be relatively low as a consequence."

Mr Wilcox said this could affect the supply of vegetables for Christmas.

Andre de Bruin, chairman of Vegetables NZ which does not represent potato or onion growers, said he had not heard of significant issues from its members this winter.

He said with many vegetables it was too early to know what Christmas supply would be like.