A farm leader said it is an understatement to say he is disappointed at Fonterra's $196m loss and the new management must be a "new broom" to revitalise the company.

Today's announcement of a $196 million loss for the year ended July compared with last year's profit of $734m. The dairy co-operative's revenue was up 6 percent to $20.4 billion.

Federated Farmers dairy chairperson Chris Lewis said it was a big loss and they "simply must do better".

Farmers and shareholders will be looking for the new management team of chief executive Miles Hurrell and chairman John Monaghan to shake up the company, he said.

"I hope those two have a new broom for the shop floor. Good communication will be key."

Mr Lewis said it was an understatement to call the loss disappointing.

While the forecast milk price for the 2018/19 season was good, the downside was the company's loss and its higher debt.

He said Fonterra faced a problem in retaining the loyalty of New Zealand farmers.

Frosty day in Fonterra HQ today. Chairman John Monaghan won't say if it trusts Beingmate, or if the former CEO, who ditched last month, will get a bonus. Interview here: https://t.co/cxtcPhQJ0L

Fonterra reported its first loss after two hefty one-off payments after it had to pay compensation to Danone and it wrote down the value of a Chinese investment, as well as a squeeze in its profit margins.

Those two items costs it $670m and added to the pressure from tougher competition.

But chairman John Monaghan said farmers had still got some of the best prices in a decade.

"The headline number is good. Where we didn't perform is in our earnings and forecastings. It is certainly not where we wished to end up."

Mr Monaghan also confirmed Fonterra will pay farmers $6.69 a kilo of milk solids for the season just ended, to which the interim dividend of 10 cents is added.

There was no final dividend. He also maintained a forecast of $6.75 for the season just started.

"There's no denying that our farmers are unhappy with current performance, and this year's results," he said.

"The underlying result and its impact on earnings, dividend and carrying value is totally unacceptable and one that our farming families will not want to see repeated. It is imperative that our business builds confidence through achievable targets and at levels that support a higher carrying value of our farmers' investment."

He said he was encouraging that the new management was willing to take a hard look at the company's position.

But there was a need for more open discussions on the future.

ASB Senior Rural economist Nathan Perry said some of the underlying trends at Fonterra were worrying.

"A worrying pattern has developed. Fonterra starts the year bullishly with its forecasts, but then fails to deliver financial results that match its plans. Even in the years where the milk price is low, profits and dividends have been modest at best."

"The forecast earnings per share for FY19 of 25-35 cents should be considered a minimum, in my view."

Federated Farmers meet Fonterra executives regularly and will want to "push for improvements and keep them on their toes," said Mr Langford.

Ouch. Fonterra’s $results are very disappointing. The Board & Mgmt will need to explain the ‘why’ & importantly what’s the go fwd plan? Farmers do the hard yards producing the milk & must see big improvements in performance. Regional NZ & the economy relies on a strong Fonterra.

Fonterra's former chief executive Theo Spierings, who exited the company last month, was paid more than $8m for the year.

More than $4m of his pay included long-term incentive bonuses from the previous three years. 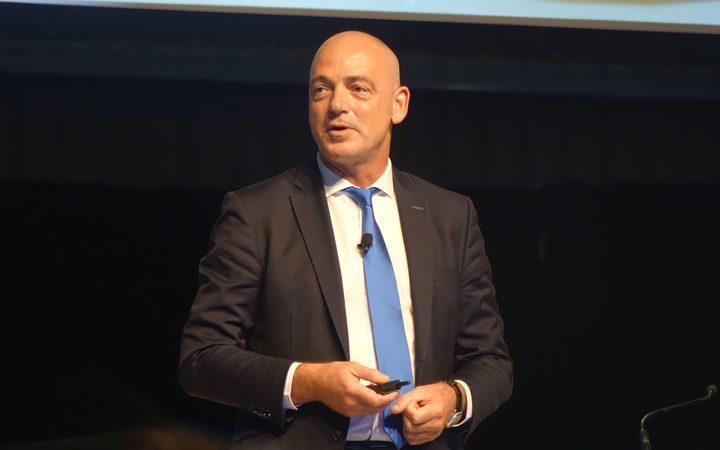 The board has discretion over whether or not he will be paid a bonus for the year just ended.

Mr Monaghan did not say if he would receive another bonus, but said his payout for the year just ended had already reduced by 58 percent.

New chief executive Miles Hurrell said Fonterra plans to review all its investments, major assets and partnerships to make sure they are delivering the best financial returns. It would start with its near 20 percent stake in Beingmate.

He said it would also be fixing underperforming businesses, and look to keep control of costs so it can cut debt. Fonterra would also improve its forecasting so it can make better decisions.

Mr Hurrell said the company expected operating earnings in the range of $850-$950m for the current year.

"Financial year 2019 is about lifting the performance of our co-operative," he said.