High-tech surveillance equipment and two tracking dogs have been called in after a wallaby was spotted in South Hokianga. 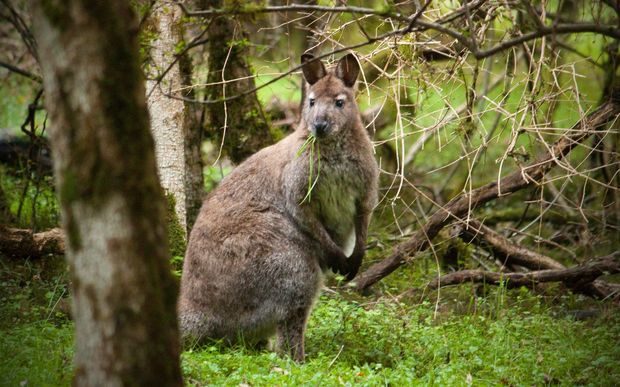 Staff from Northland Regional Council and the Department of Conservation (DOC) and Te Roroa iwi members are scouring about 500 hectares of farmland and native bush.

Council biosecurity manager Kane McElrea said a person had seen a wallaby on at least two separate occasions at their Waimamaku property in recent months, but did not initially appreciate the potential significance of the sightings.

The council became aware of the situtaion in mid-April when another Hokianga local heard about the sightings and reported them to DOC.

Two specially-trained wallaby tracking dogs and their handlers had arrived in Northland in the past few days to help with the search.

Wallabies were unwanted because they eat native and exotic seedlings and pasture, Mr McElrea said.

That made them potentially costly to the farming and forestry sectors and posed a risk to native bush too, as they could limit the regeneration of some species.

"In my opinion, they're even more of a threat to Northland than possums, which is why they're are formally classified [by the council] as an 'exclusion pest,'" he said.

Several wallaby species already live in other parts of New Zealand, including South Canterbury and Rotorua, so the potential Northland sightings were being taken seriously, Mr McElrea said.

"If indeed a wallaby or wallabies are here, the most likely scenario is a deliberate, and illegal liberation from either the central North Island or Kawau Island."

Wallabies were famously introduced to New Zealand almost 150 years ago, when Sir George Grey released them on Kawau Island in the Hauraki gulf.