A new genetic centre in Waikato hopes to overcome what scientists say is a lack of research in quantitative genetics in New Zealand. 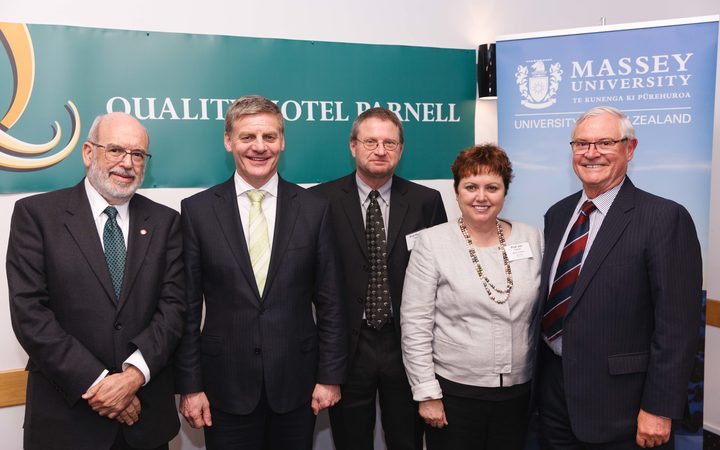 Prime Minister Bill English was on hand to announce the development of the new genetics centre. Photo: Supplied

The Massey University AL Rae Centre for Genetics and Breeding is based at AgResearch's Ruakura Research Centre in Hamilton.

It's named after one of the founders of modern animal breeding, Professor AL Rae and funded by the Norman FB Barry Foundation.

Dorian Garrick, who is chief scientist for the centre, has come home after 15 years in the US to try and encourage more graduate students and post-doctorate fellows to work on improving animal genetics.

Professor Garrick said the centre would be a big boost to the farming sector because many of the sectors involved don't work with each other well.

"An organisation like the centre, particularly when it's located on neutral grounds like here in the Waikato, can work with people together that wouldn't otherwise collaborate very easily."

He said there was a tremendous value proposition for investment in genetics to improve a whole range of agricultural industries.

"Basically what happens is we measure a small fraction of the individuals in the population, we select the individuals that are most elite to use them as parents, and then we disseminate the offspring of those individuals for commercial use on farms around New Zealand.

"If you look at the benefits to New Zealand they greatly outweigh the costs of the measurement and other research that's required to identify elite animals."

However, one problem with this is that people who invest in breeding elite animals often aren't recognized, Professor Garrick said.

"[They] don't always get properly rewarded for the benefit that consumers or farmers who use those animals, achieve from their use."

He said it was harder than it should be to attract students into genetics.

"If you look around today you'll find that many people in these jobs have been obtained from somewhere else in the world because there haven't been enough graduates coming through our own programmes here in New Zealand."

Professor Garrick said the new centre was aiming to have up to ten post-doctorate students working there in the next couple of years.