Faced with volatile payouts and ever increasing land values, some established dairy farmers are struggling to pass on the family farm. 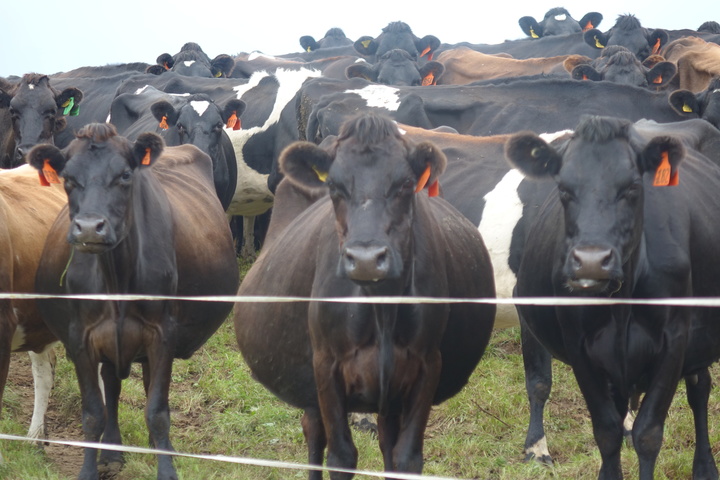 The average dairy herd has doubled in size over the last 20 years. Photo: RNZ / Robin Martin

Family members are choosing other careers, there are fewer sharemilkers looking to buy and contract milking and corporate-like structures are increasingly replacing the family unit.

When Taranaki dairy farmer Len Jury's sharemilker resigned, the 75-year-old faced a stark decision about what to do with his Omata property, which had been in the family for 170 years.

"I've come to the stage where our sharemilker has got to 50 and, as he'd always said, he was not going to carry on.

"I didn't realise when he came 50 what age I would be, and I really wasn't prepared to carry on, and our son and daughter had said 'no', they weren't interested in carrying it on as owners as such," said Mr Jury. 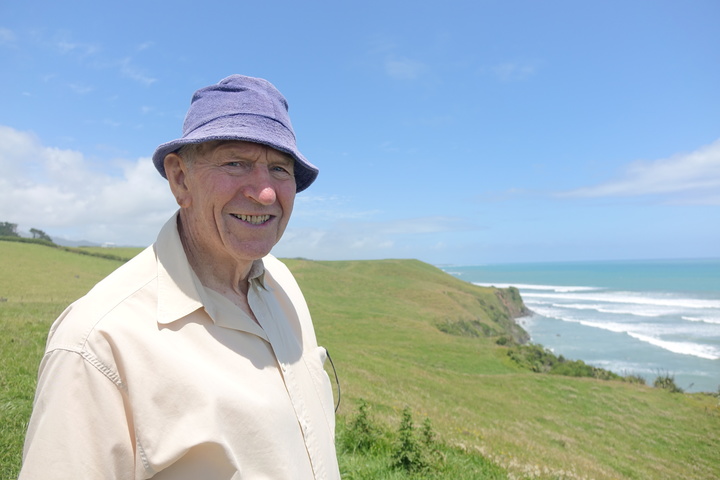 "So I thought somebody's got to make the break and it's better for me someone who's got some affinity with what the situation is to go ahead and do it."

They Jury farm was bought from Taranaki Māori in the 1840s and is steeped in colonial history and the site of the Kaipopo Pā. 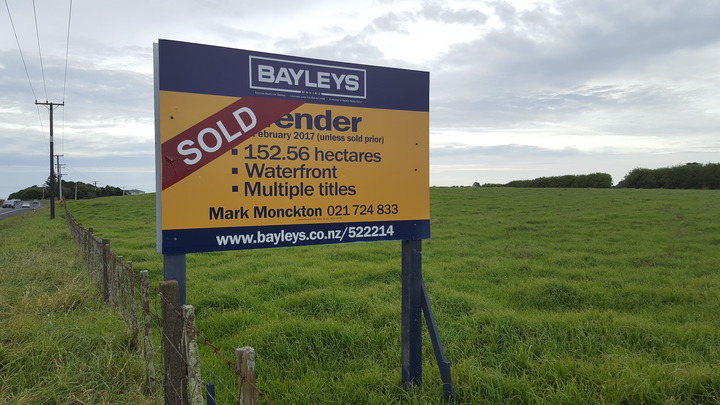 Len Jury's farm was snapped up by a property developer soon after going on the market. Photo: RNZ / Robin Martin

The battle of Waireka - the first major engagement of the Taranaki Wars - occurred on the farm and it was where navy coxswain William Odgers won the first Victoria Cross awarded in the New Zealand Wars.

Mr Jury said the decision to sell did not come easily.

Mr Jury sold to a developer who saw value in the property which enjoyed stunning seaviews and was on the outskirts of New Plymouth.

Succession planning for farmers is becoming increasingly important, as their adult children choose other careers and the size and price of farms - combined with volatility in dairy markets - made buying a property less attractive to sharemilkers. 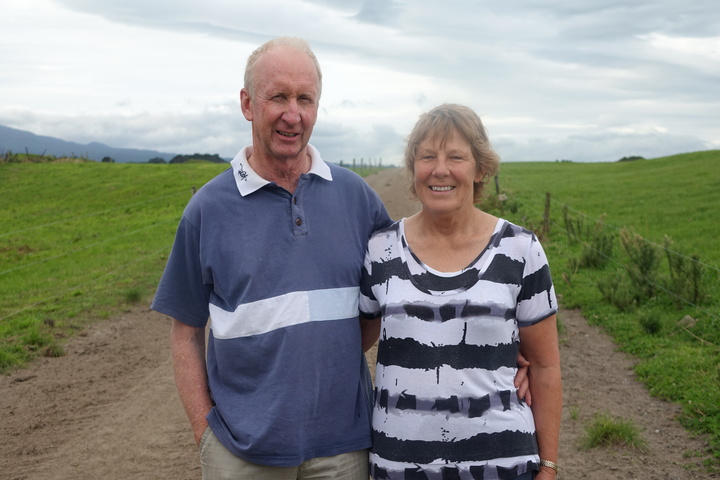 Ian and Judith Armstrong have established a governance structure to allow their daughters to retain ownership of the family farm while installing a operations manager to run it. Photo: RNZ / Robin Martin

Further around the coast, Ian and Judith Armstrong have been wrestling with their own succession dilemma.

The couple farm more than 500 hectares and milk 1000 cows but now in their 60s, Mr Armstrong said they were looking to step away from the day to day operation of the business.

"Judith and I have two daughters both married. One is an engineer currently swanning around Europe on a bike with her husband.

"They've been working in Perth for the last four years or thereabouts and she won't be coming back farming.

"The other is an accountant in Wellington working for DoC and she and her husband likewise won't be coming back."

The Armstrongs brought in an outside consultant to help them with a succession plan.

"What we've done in our own family situation is we've set up a governance board. We don't have an outside shareholder at this time but that may occur in the future.

"When the kids get back into New Zealand we are going to be undertaking a training programme and they'll be acting as governors rather than hands on farmers."

Mr Armstrong said it wouldn't be possible for a young farmer to sign a cheque for a large property like his and they had installed former Taranaki Sharemilkers of the Year Charlie McCaig and his wife Jody as operations managers.

"If you want to bring these people forward bring them into the industry you've got to look at other ways of doing it, of perhaps 50-50 sharemilking and then going and buying your first farm." 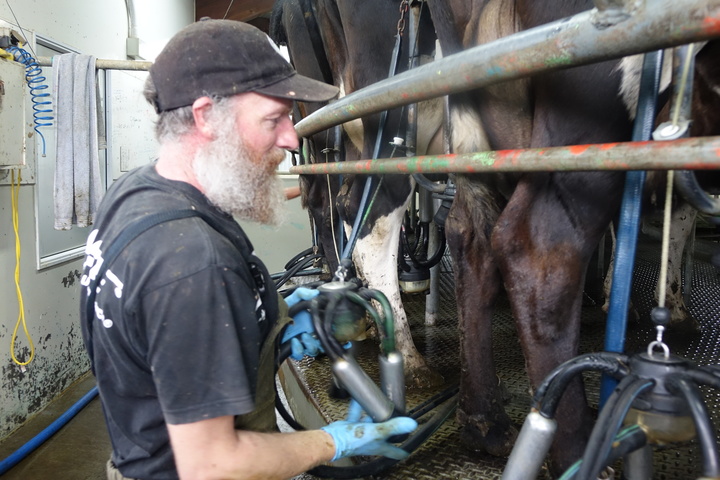 A 2016 AgFirst report shows the number of dairy farms in New Zealand has fallen by more than 2600 over the past 20 years to just under 12,000, while the average herd size has doubled to 419.

Over the same period the number of herd-owning sharemilkers - a traditional route to farm ownership - has declined by 1564 and accounted for just 17 percent of operators in 2014/15.

Last year only 47 percent of sharemilkers expressed a desire to own a farm, down from 70 percent in 1996.

Mr McCaig said the arrangement with the Armstrongs was a win-win.

"It's allowed us people who are poor in equity to team up with people who've done well and worked really hard to get to where they've got to, but haven't got anyone to directly hand over to. So we can come in and we've both got something that each other want."

Mr McCaig said he had reappraised his goals.

"If coming in and ending up with a family farm is a tricky thing now, maybe that doesn't need to be our goal.

"Just growing some equity along the way is the goal. It's about actually growing something through the period of years your bodies are capable of working." 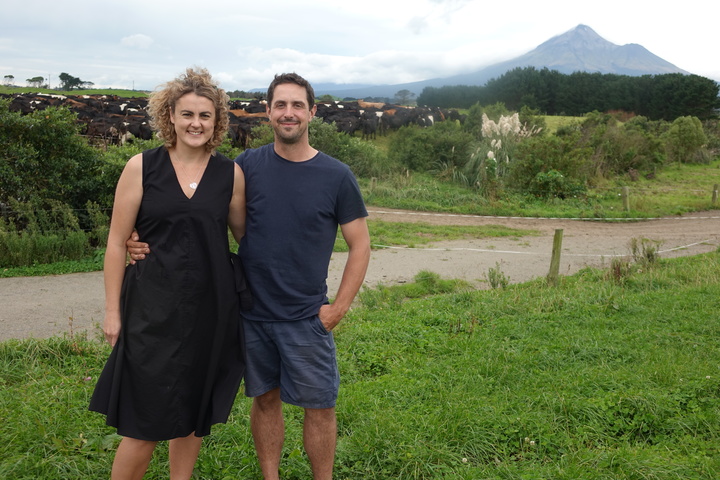 Charlie and Jody McCaig said their relationship with the Armstrongs was a win-win for both couples. Photo: RNZ / Robin Martin

"There's a lot of people that have accepted that what they're going to be is a professional sharemilker or a professional farm manager and there is nothing wrong with that model. If they're happy doing that, then that's what they should do.

"I think as an industry we've set an expectation that if you go into farming your ultimate goal must be to own a farm."

Ms Knowles said the $55,000 per hectare price of land in Taranaki was a barrier to ownership, but the dream was still possible if people were willing to put in the work.

Although Mr Jury believed the rise of the corporate farm was irreversible, he also reckoned farm ownership was possible.

"If a young couple really want to have a farm. They will achieve it, there's no two ways about that. If they've got that dream and they want to work at it good luck will sit on their shoulders and that's what it boils down to." 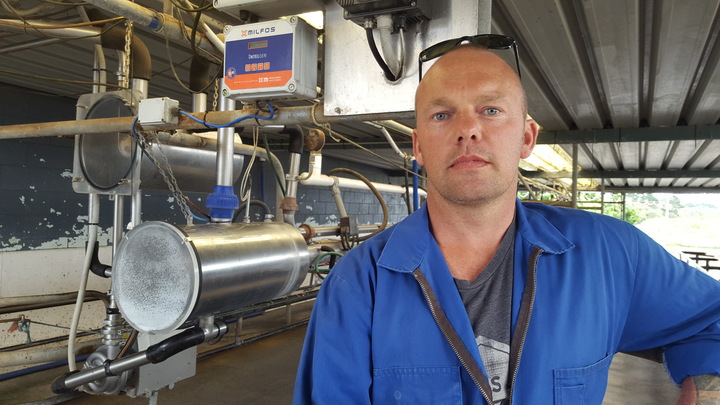 It is not Ryan Gargan's dream.

He's a fifth generation farmer who lived just up the road from the Jurys, but he was not looking to take over the business.

Mr Gargan said family succession meant the incoming generation had to borrow to payout the retiring one, and there was only one winner and it was not the farmers.

"Generation after generation they're simply having to buy the farm again and again and the only people who win over a 200 year period are pretty much the banks."

Mr Gargan chose to lease land from his family's trust, milk once a day and keep his investment options open.