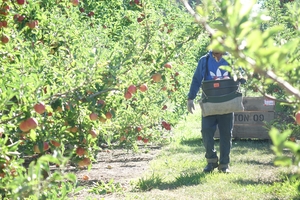 The Ministry for Primary Industries (MPI) is aiming for the horticulture sector to reach $5.7 billion in exports by 2020, up $1.6 billion from the end of last year.

An MPI report shows that the horticulture industry needs nearly 8000 skilled workers by 2025 to cope with the predicted rise in production and export earning.

"What they need is not just people to pick fruit and stick it in boxes, it's actually become a very sophisticated business, so while there is a whole lot of people coming in with the seasonal worker contracts, the reality is the industry needs long term people to stay in there, learn and move on to some of the more sophisticated jobs like marketing, logistics, human resources.

"All these industries they're growing, they're becoming more corporatised; and as a result of that you need to have not just people who are working on the orchard."

Mr Shennan said if those jobs weren't filled, it could flow on to effect exports.

"The thing with agricultural and horticultural exports is that when the demand is there it's really hot, everyone is trying to pile in resources and are desperate to meet the demand - and if you can't meet the demand then it could potentially shift elsewhere."

In 2012, 40 percent of the horticulture workforce had a formal post-school qualification, but Mr Shennan said by 2025 it needed to be 66 percent.