Floral tributes and signs are building up outside the shop of Abdul Aziz, who threw an eftpos machine at the Christchurch mosque attacker on Friday. 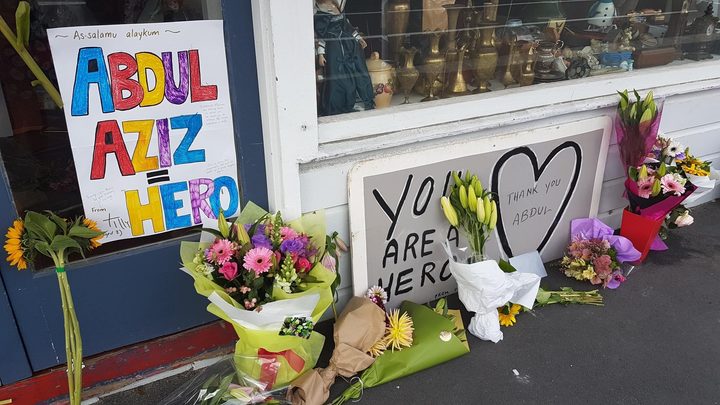 Floral tributes and signs are building up outside the shop of Abdul Aziz, who threw an eftpos machine at the attacker. Photo: RNZ/Katy Gosset

Mr Aziz was at the Linwood Mosque when the attack happened. He saw his "brothers and sisters" starting to fall so he grabbed an Eftpos machine and hurled it at the alleged killer, then picked up a gun and confronted him.

When the assailant saw Mr Aziz had a gun he ran back to his car.

Shortly afterwards, the car was rammed off the road by local police officers and a man was arrested.

Mr Aziz's local community has so far raised just over $1K to support him and his family.

As the country continues to support the Muslim community and mourn those killed in the attacks, more burials and vigils will be taking place today.

The first burials of those killed in the terrorist attack on Friday took place yesterday, with Khaled Mustafa and Hamza Mustafa laid to rest at Memorial Park Cemetery in Linwood, Christchurch.

More are expected today, with the burial of Haji Daoud Nabi at Memorial Park Cemetery to be open to all members of the public.

The burials come as New Zealand and Australian officials sought clarification from Turkish President Recep Tayyip Erdogan over inflammatory comments he made following the attacks, including playing footage of the attacks at his political rallies.

Ms Ardern yesterday said deputy Prime Minister Winston Peters would confront Mr Erdogan over the comments when he visits the country. She also announced there would be a two-minute silence to honour the victims on Friday, and the call to prayer would be broadcast on RNZ and TVNZ.