Shaggy-haired Aucklanders can finally get a haircut this week as they get ready for life out of lockdown. 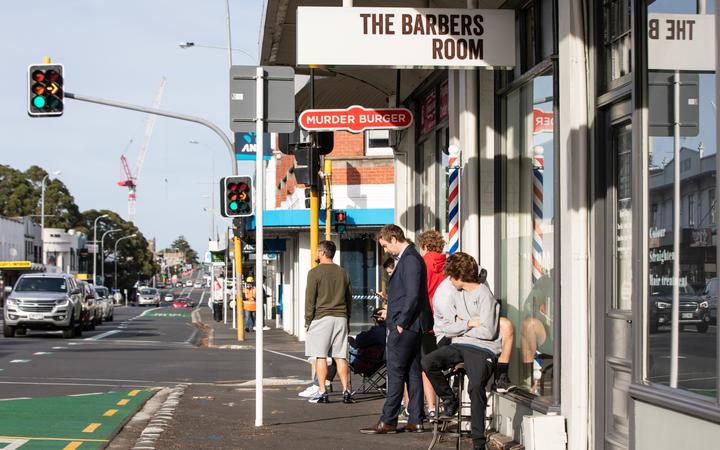 Barbers like this one on Dominion Rd in Mt Eden were allowed to test the new system. Photo: RNZ / Dan Cook

Along with the rest of the country, the city will move into the new traffic light system at the end of next week.

In the meantime, Auckland hairdressers and barbers are allowed to test run the new vaccine pass system and open the doors from Thursday, 25 November.

Hairdresser Simone Jones, who owned HeadStart Total Body in Glen Eden, was "shocked but happy" to be going back to work, but said there was a lot of work to be done ahead of reopening, including rebooking 13 weeks of appointments.

To take part in the trial, hairdressers and barbers must operate with vaccine passes, with all staff double dosed and wearing masks.

People must book ahead as walk-ins cannot be accepted and customers must sit a metre apart.

Simone Jones expected it would all go smoothly.

"Most of us know our clients know our clients, so actual contact tracing and vaccine pass should go fairly smoothly. There shouldn't be too much fraudulent or unvaccinated people to get in."

But Max Whitehead from the lobby group Small Business Voice was more pessimistic about how the vaccine pass system will work when it goes nationwide on 3 December.

'It's very difficult, particularly for small businesses. You imagine a small cafe run by a husband and wife team, both behind the counter. You can't stand at the door and police people and banish them from their business. It's going to cause a lot of angst and difficulty."

While businesses would be grateful to reopen while desperately clinging onto staff, he suspected some would turn a blind eye to government rules.

"But if the prime minister said unfortunately you're going to have to tell a couple of staff members or customers to go away, I don't think that's going to go down well with a lot of small businesses."

'It was an onslaught'

"There was five hours last night where it was just email, email, email. You've got people talking to you on Instagram and Facebook. I'm so glad we didn't have the phone as well, that would have just driven me mad."

French Revolver Studio owner Brad Lepper will be working six days a week including four late nights until Christmas. Staff at his central city salon have the option of working whatever hours suit them.

Lepper was still to see information on how to set up his My Vaccine Pass system but if it was as easy as the QR code to scan it would be fine.

The verifier app that businesses can use to scan vaccine passes is being launched on Tuesday 23 November. The government will give out more information and advice about the traffic light system this week.

Both salons are still set up for 2m distancing with shields manufactured to fit between basins - the rules in last year's lockdowns.

Now the more infectious Delta variant was causing larger numbers of cases in the community, Kelly was unsure about the rule allowing customers to remove theirs when sitting in the chair.

Lepper said hairdressers could work round a customer's mask and if needed ask them to take one ear loop off at a time and hold the mask to their face.

He was expecting a "few dodgy fringes, maybe a few mullets" to turn up after three months of home hairdressing.

"It'll be a fixup job for Christmas for sure."

Some of Kelly's customers might make a change after growing out their hair or deciding they like their grey, she said.

"If you can pull off a new man bun, pony tail or or mullet look, wear it, she said - otherwise "get the chop".