Opinion: The announcement of an Agreement in Principle (AiP) on a future free trade agreement with the United Kingdom warms the heart at a challenging time. 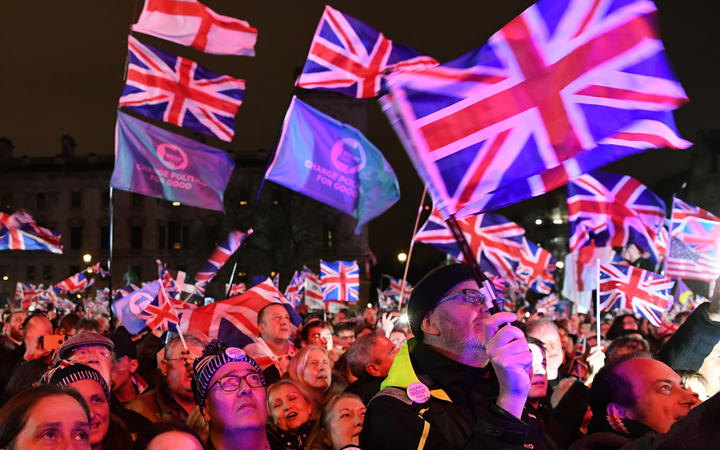 The free trade agreement with New Zealand is just the second such deal the UK has signed since Brexit. Photo: AFP

Some 139 years after the first refrigerated vessel left for the "mother country" and 48 years since Britain cast its lot with a united Europe, New Zealand and the UK are back in the business of freeing up bilateral trade and investment, Stephen Jacobi writes.

That they have managed to do so, after only two years of negotiation, and at one of the most challenging times in modern history, when negotiators cannot meet "kanohi ki te kanohi", is all the more remarkable.

Although this is not the final FTA deal, but an AiP that will require more work, both governments have put down a clear marker about their future intentions.

The stage now reached is a testament to the political will of both governments and to the fortitude of negotiators on both sides. It also clearly reflects changing dynamics in world trade and in particular the arrival on the scene of "global Britain".

The latter, which became something of a rallying cry for Brexiteers, seemed somewhat unlikely as the UK was leaving the largest FTA in the world and its largest market to boot: back home in Britain, it therefore became vital for the Conservative Government to show that there was life after Brussels, even with tiny New Zealand and not-that-much-larger Australia.

But this is the start of a longer journey, the map for which points more widely to the Asia Pacific region and to future membership of the Comprehensive and Progressive Trans Pacific Partnership.

Membership of CPTPP will more definitively put the "g in global" and agreements with both Australia and New Zealand along with others in the region are part of a larger game.

The agreement is about more than just politics.

Here too the agreement speaks to changing dynamics.

Long gone are the days when governments can simply agree to open markets to increased trade and investment. Now these so called "free trade agreements" encompass wider aspects of economic management and also what were once somewhat dismissively called the "externalities" of trade: today this includes the environment and climate change, labour, the inclusion of women and Indigenous people.

Governments are under the gun from domestic stakeholders to demonstrate that trade agreements can be made to work for all.

So, the UK and New Zealand have chosen in this putative agreement to go even further than previously and to set a high standard for the future.

Of particular note is that the Agreement is set to include an Indigenous trade chapter, as well as continuing of course to recognise the importance of Te Tiriti o Waitangi.

Notwithstanding this heady stuff about politics and new inclusive and sustainable models, trade agreements and are only worth doing in the first place if they give rise to new trade and investment.

The NZ/UK agreement would appear to reach a high and welcome benchmark in terms of comprehensiveness - tariffs are finally removed on all products within 10-15 years.

That end point may be on the high side, but commercially meaningful access is provided, on entry into force, across all New Zealand's key export sectors including dairy, meat (lamb and beef), horticulture, wine and honey.

This should translate into some big new opportunities for exporters - not enough to lessen the importance of China and Asian markets, but enough to make a real difference to exporters' market choices.

Services are included, such as financial services and telecommunications of particular importance to the UK.

The Agreement provides enhanced market access with the ability to deliver services in New Zealand, including by UK suppliers.

Some of a xenophobic ilk may not like this, but it is clear that the supply of specialist skills needs to be increased, as does the flow of investment capital: the Agreement provides new facilitation for investment but does not provide what some may regard as the infamous mechanism for investor state dispute settlement.

The trade and investment gains are backed up by forward-looking trade rules including in the digital space, reflecting the importance of the way interoperable digital systems enable goods trade today.

This agreement comes at a time when supply chains face extraordinary disruption and when the global economy is looking for new growth. The global mood may be sombre, but concluding high quality, ambitious and comprehensive trade agreements is still possible, if governments put their mind to it.

Although this negotiation has been conducted virtually, there is nothing virtual about the value of the FTA for both New Zealand and the UK - that is, if agreement in principle is followed in due course by the final, signed and ratified agreement.