Asian stocks and US stock futures rose on Thursday, while Treasury yields remained high and the dollar unwound overnight losses after supporters of President Donald Trump stormed the US Capitol and Democrats won control of the US Senate after runoff races in Georgia. 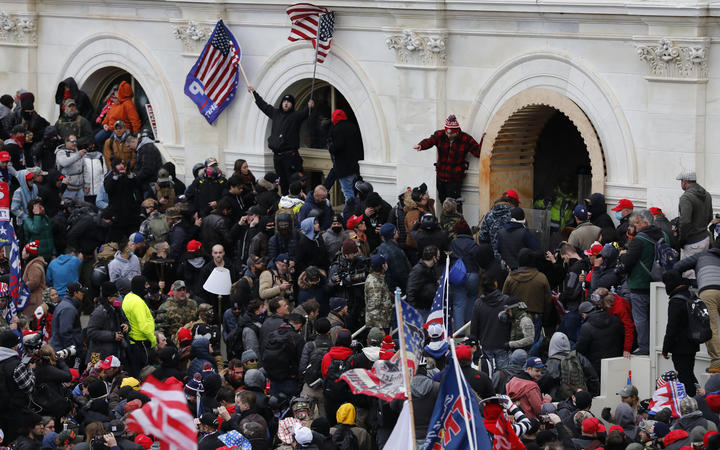 Supporters of US President Donald Trump storm the US Capitol during a rally to contest the certification of the 2020 US presidential election results. Photo: AFP

The following are investor comments after a tumultuous day in US politics:

"It's basically a reflation trade. Anything that benefits from rising prices is going to do well.

"The market had a one-way bet that the Republicans were going to win both seats in the Georgia runoff ... but as we found out that didn't happen, and that changes a lot.

"The reason why there's a relation trade is when you look at the policy settings they are trying to get through, it's about printing to the Main Street and not Wall Street.

"A huge amount of money has come out of the bond market. Even though only a portion of that went into equities, it's jammed up equities. When passive money moves around this is what happens."

"The rise in yields and stocks can be explained by the Blue Wave and expectations that Biden's win will lead to massive fiscal stimulus, but I think fiscal stimulus is an old story.

"The events in Washington show that the United States is divided and we have to question whether the people will be united once again. It looks like maybe not.

"This is bad for equities and the dollar. The equities rally is already over-extended and looks like a bubble. I can't see Treasury yields rising much further from here. It looks like a good level to buy Treasuries."

"Commodities are up and banks are up. The catalyst for that is really the Democrat win of the Senate, and in fact you can see it in the intra-market movements.

"Tech came off and anything considered value - or really 'old-economy' stocks - moved up.

"Biden now has a greater pathway to approve his laws.

"There's only one way a riot can de-rail the stock market and that's if it spills over into the economy. If a riot results in a lockdown, like what you would expect with a Covid lockdown, then you could potentially see stock market ramifications - but these feel more like skirmishes rather than a wide lockdown."

"The mob has interrupted to the process of Biden's confirmation, but the mob will not overturn the process because Republicans are saying no to that.

"The market is optimistic that Biden's victory will not be overturned.

"Realisation of the Democratic sweep will be positive for the US economy, US stocks, and the dollar.

"Higher Treasury yields should benefit the dollar against the euro and the yen, because the dollar has underpriced the potential for US economic recovery under Biden.

"However, the dollar will remain weaker against commodity currencies like the Aussie and emerging market currencies.

"Markets are trying to position for a US economic recovery. This is easy to do in Treasuries and stocks."

"What give us a little bit of a pause is that the economy is still very fragile and I think it's unlikely that Democrats are going to have as easy of a time as markets are trying to predict in passing some of these policies. Especially when it comes to tax reform, I think the window is relatively small. It's going to be difficult to achieve that level of tax reform and some of these restrictive policies as cooler heads prevail and the Democratic process works itself out."

"What market is really (keen on) is more stimulus. We've seen over the course of 2020 Democratic party be much more open to providing stimulus to vulnerable Americans. That, along with additional support for greater fiscal policy as we climb out of Covid-19 downdraft in the economy and hopes for an infrastructure bill."

"The Georgia senatorial elections tipped in favour of the two Democratic candidates, which gives Democrats, with Vice President Harris' vote, a narrow majority in the Senate and that increases the odds of greater fiscal stimulus and a proposed infrastructure spending package."

"It's a re-positioning. I've been saying this for a couple of weeks, if there was a Democratic sweep the market has to reprice a little bit. It doesn't mean it has to fall out of bed. A five percent or seven percent move lower is well within the normal trading band and wouldn't be out of the question at all before the market finds stability. The market will figure it out but the path of least resistance is right now is lower before it goes higher. Five to seven percent is well within normal and actually it is probably very healthy if it does that anyway."

"We are trading as if Democrats have won both of the races, which mean more fiscal deficits and a steeper Treasury curve and there we enter into the psychological level of 1 percent in the 10-year treasury yield and that seems to have caused a significant move in growth (stocks).

"Growth of course depends on the expectations that rates stay very low so the two are related phenomenally. It's interesting because it shows that everybody expects that eventually we get a tapering and we get higher yields and of course growth is going to tank and value is going to outperform. We are seeing a preview of it right now. That's the surprising message of the market."

"If Democrats hold both houses then there will be more pressure to regulate some of the bigger play within growth. Most of the (market) gains are concentrated in them and hence they are very sensitive to this."

"There were a lot of people lined up to buy (Treasuries) if there was a blue wave election in November, and they got disappointed and instead it was the sellers at the long-end emphasizing TIPS purchases and all sorts of inflation-protection strategies that carried the day. Now you're going to be dealing far more with fundamentals, and what's the 'real economy' going to look like when we end 2021, as opposed to what might happen. All the things that fell into a 'what if this happens,' such as senate control changing, are now here and so we can start to deal with what's here.

"I think the big thing is you could see easily another half a trillion in terms of direct aid to states. That idea has never died. I don't know what the exact amount would be but it's something on that order, which is real, versus where we were before the Georgia runoffs. But it's not so big that it changes everything."

"This means markets will anticipate more fiscal stimulus which could prop up inflation and mechanically push US interest rates higher but this also increases the prospect of more regulation imposed on technology companies as well as corporate tax hikes.

"With 10-Year Treasury yields above 1 percent on expectations of a Democratic Senate and the Fed committed to support the market, the US Dollar would be expected to further tilt lower versus its main peers."

"I don't expect major stock market implications surrounding a 50-50 tie in the Senate. While the Vice President's vote means that a straight party line vote would belong to the Democrats, some of the market unfriendly policies that investors have been worried about in the event of a Blue Wave are still not going to come so easily. There are now three moderate Democrat Senators (most notably Joe Manchin of West Virginia) and House Democrats maintain a small lead."

"The Democrats' small lead in both the Senate and the House will make it tougher than many believe to pass tax hikes, impose regulation and enact some of the other market unfriendly policies that investors have been worried about under a Blue Wave scenario."

"It's even if the Republicans should hold on to the Senate, it's by a very slim margin. That means the Democrats can say it's a victory. That means they have a better chance of passing legislation since they can always capture an independent or a more progressive Republican.

"If you look what's happening this morning financials, energy, sectors related to infrastructure are strong, and tech stocks are getting badly beaten. What is that suggesting? Taxes will probably go up and certain sectors of the market could get hit. What we're seeing this morning is somewhat of a snapshot of what may be in store 3 to 6 months down the road."

"The Georgia senatorial elections tipped in favour of the two Democratic candidates, which gives Democrats, with Vice President Harris' vote, a narrow majority in the Senate and that increases the odds of greater fiscal stimulus and a proposed infrastructure spending package."