'For Lease' signs are popping up in empty shop fronts and office blocks in Auckland as the effects of the second lockdown grip the city. 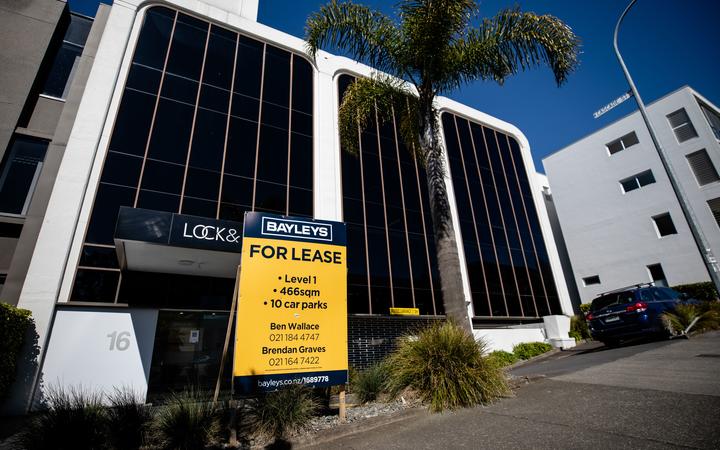 Bayleys commercial real estate agent Millie Liang said about 100 floors' worth of office space was available to sub-lease from companies that no longer needed it. Photo: RNZ / Dan Cook

During August's level 3 lockdown, around 3000 people started claiming unemployment benefits or income relief, while another 1000 businesses registered for support - adding to the nearly 2500 already on the books.

Bayleys commercial real estate agent Millie Liang said about 100 floors' worth of office space was available to sub-lease from companies that no longer needed it.

"It's huge - it's a hundred floors. This is a very challenging time."

She said before borders closed any companies subleasing space preferred to market the space confidentially, but now with a lack of tenants they needed to openly advertise.

Liang said it's a tenant's market and many were demanding deals in order to survive.

"Tenants are starting to talk to their landlord and say 'what about you offer me the same discount you offered me in level 4'," she said.

Another realtor, Barfoot and Thompson's Justin Lowe, has worked with retail landlords in the city for five years.

He said times were tough for both businesses and their landlords.

"It's exceptional now. They can't trade and they can't open for business. That makes it very difficult. As we can see everywhere, businesses are folding and it's the worst I've ever seen it," he said.

Lowe said a lack of confidence was putting off new tenants from signing leases, even with discounted rates.

"The type of deals that are going through now are heavily discounted but they also have to think about do they wait to get a good tenant or do they take what they can get because obviously it affects their mortgages as well."

He said outer suburbs' retail strips were faring better with many people still working from home, frequenting their local dairy and cafe.

Official commercial vacancy rates lag real-time and still paint a relatively healthy picture compared to what appears to be happening on the streets.

Auckland City business association, Heart of the City, monitors foot traffic and said there were 40 percent fewer people in the city last week - the first under level 2.5.

"The numbers aren't enough to sustain all the businesses we have so working from home definitely has an impact and we can see that businesses are phasing their re-entry back to the city centre," she said.

"There's only so far you can go with little or no income so we are seeing more vacancies and that's a concern.

"We're doing what we can to start thinking about ways to utilise space but it's a very tough time and sad to see businesses in that position."

The association is due to release spending figures for that first week of level 2.5, later today.

But already there was no question the second lockdown had been tough for Auckland.

Development agency, Auckland Tourism, Events and Economic Development - or ATEED - was giving out an average $250,000 in grants to struggling businesses each week.

It has temporarily more than doubled its support team.

Chief executive Nick Hill said many businesses were running low on cash flow, having used up reserves during the first full-scale lockdown.

"This time round people don't have the same level of resilience they had the first time and we are seeing things like the 80 percent wage subsidy, employers being far more reluctant to pay that extra 20 percent," he said.

Hill said it's "scary" to see vacancies rise in the city and know that some business won't return.

ATEED was working with the private sector to plan for the city's economic recovery.

"The real challenge is the next two to three years but beyond that Auckland's future is extremely positive and we just want everybody to be able to get through this period."