A new taxi company has launched in an effort to fill the void left by Green Cabs, which was put into liquidation in May. 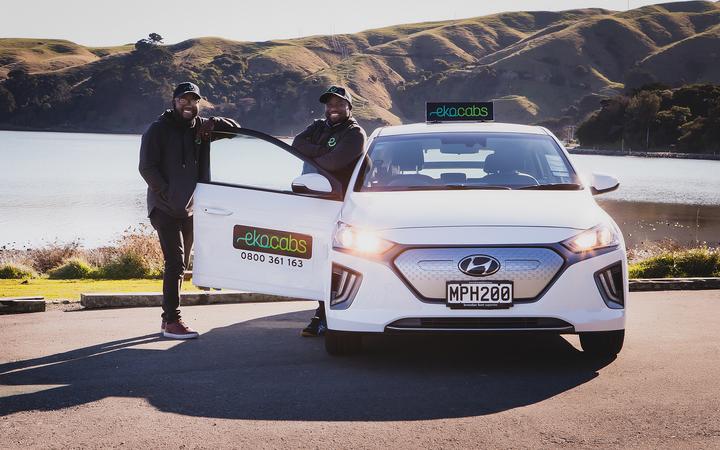 Ayo Oyawale and Tayo Agunlejika are proud to have launched EkoCabs in Wellington this month. Photo: Supplied

EkoCabs has been spun out of the failed company, offering Wellington customers a fleet of taxis which is 100 percent electric.

Its co-founder Ayo Oyawale, who used to drive for Green Cabs, said Green Cabs' departure from the market had created a gap that was not being filled.

"It's a void for starters, but we are going a little further than that and [are] looking in terms of the entire industry and where things need to be going."

EkoCabs has 13 cars in its fleet with plans for expansion.

"We expect that we will be able to have more business, more revenue, shift people's choices to consider fully electric options," Oyawale said.

EkoCabs had been entirely funded by Oyawale and his partner, Tayo Angunlejika, who also used to work for Green Cabs.

Oyawale said with no overheads, and a prudent approach to spending, the company was well positioned since it launched after lockdown.

"We haven't taken on any financing or debt, so we are keeping costs low, we are pretty much what our revenue brings in.

"An approach we've done is to outsource a lot of our major operations, in terms of call centre, in terms of our dispatch system, so we're paying incredibly smaller amounts for those costs.

"That's what I think will help us fare differently."

Oyawale acknowledged that some people may think it is a difficult time to start a taxi business, but rides were coming through and the company was generating revenue.

"We're giving it a go, we're not saying it's foolproof or fail proof, we're just two guys that chose to explore options when things were down and out for us.

The company was not just sticking to taxi fares to drive revenue, there are also plans to diversify and supply electric vehicles to the rest of the taxi market.

EkoCabs has priced itself at the middle of what the market has to offer.