New Zealand's little-known photonics industry is worth more than a billion dollars, and can grow exponentially. 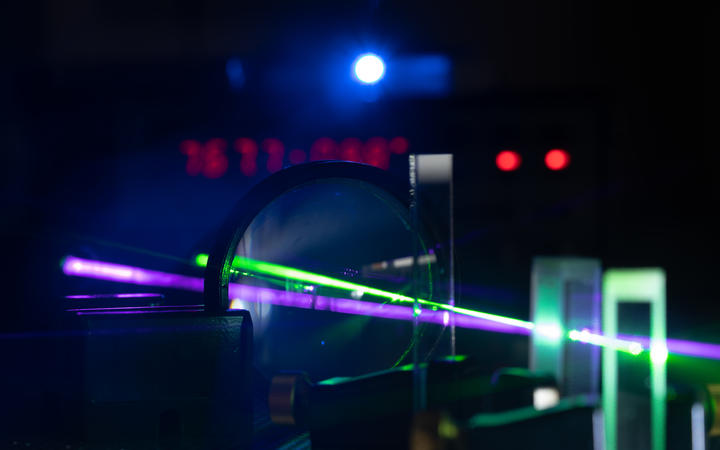 Photonics uses light for sensing, manufacturing, and transmitting information, much in the same way electronics rely on electrical signals.

Products relying on photonics include smartphones, computers and fibre optics.

If ever there was a year to demonstrate the importance of the photonics industry, 2020 is it.

From Netflix to Zoom, New Zealanders adapted and coped with the Covid-19 level four lockdown thanks to photonics.

David Hutchinson, director of the Dodd-Walls Centre at Otago University says not long ago those solutions to the shutdown would not have been possible.

"Fibre optics would be a key example. We've just gone through lockdown where many of us ended up having Zoom meetings and none of that would have been possible if we weren't still communicating over copper wire."

A report released today has valued New Zealand's photonics industry at $1.2 billion, that's about the equivalent of the value of infant formula exports or about two-thirds of the value of wine exports.

The industry now involves 121 companies employing more than 2500 people and, while that is all impressive, Hutchinson says the industry can grow exponentially in the future.

"New Zealand is great at finding niche areas and doing things really, really well and this is something that we've got a lot of expertise on in this country and I think that we can really excel at.

"What we need is ingenuity and let's try to find as many problems that we can solve as possible using optical technologies.

So what are photonics?

Essentially, it's using light in applications - much in the same way electronics utilise electrical signals - but light unlocks the ability to communicate much more data - a single optical fibre can support one million simultaneous HDTV signals.

As well giving us something to watch during the pandemic, photonics may answer some problems raised by it.

Auckland University professor of physics and chemistry at Cather Simpson said Orbis Diagnostics, a company she was involved with, found the photonics technology it used to detect the readiness of cows for mating had applications for Covid-19.

"We did that during level 4 lockdown and we've already got our preliminary data looking at Covid antibodies in blood. So Orbis has pivoted from cows to Covid, we like to say, but again, using photonics."

Professor Simpson said they were still about a year away from a prototype, but it was promising.

"This technology would be something you could take to the entry way of a hospital or to an airport, so it's a point of need diagnostic system, it tells you whether you're safe to travel or safe to go visit grandma."

The applications of photonics go much further, from early detection of mastitis in diary cows to selective breeding in that industry, right through to an efficient future of indoor farming to provide low-carbon, local food supply, she said.

Andy Stevens is the chief executive of Coherent Solutions, a company that exports testing equipment for the photonics industry around the globe, and says the industry has a bright future in New Zealand.

He said there was no reason the industry could not have a similar growth metric nationally, making the industry worth $40-60 billion.