Small North Island towns that rely on the country's busiest highway to survive say their businesses have been devastated by a dramatic drop in people passing through.

Many fear their government support will run dry and they'll have to lay off staff in towns with already limited employment opportunities.

Last week's shift to alert level 2 meant the unwelcome return of traffic jams for many in the country's centres.

But small North Island towns dotted along State Highway 1 are still desperately waiting for traffic to pick up.

Anita Lynn and her husband run three cafes in Foxton and Foxton Beach, but Covid-19 and the drop in visitor numbers has forced them to temporarily shut one of them.

"Redundancies is something I want to avoid, but it's always a possibility, depending on how bad things get.

"If worst came to worst, we'd just have to shut the doors and say everything's closed until we've moved into summer. At least we know moving into summer, we've got all our long-term holiday makers here that will be back."

But she is worried their support will be cut when the scheme is extended and new rules mean they have to prove their income has dropped by half.

"What we've seen is, at least in the first 10 days or couple of weeks of being open, is that everyone is coming in and spending money because they want to. So we probably won't qualify, even though we will likely need that come July, August."

The highway is noticeably quieter and there are no campervans or obvious rental cars on the road between Foxton and Bulls.

Ninad Joshi, who runs the Bulls Super Store, has noticed the drop in traffic too.

"Forty to 50 percent of my business is based on tourists ...because we are on the main road and the tourists are normally travelling from this road."

There are two other small food shops in the town of just under 2000. So, Ninad Joshi has been dropping the prices of his products in a bid to win over customers.

But, he said he is juggling operating costs with plummeting profit, as well as hiked prices from his suppliers.

"So we might have to reduce business hours, or shut down for a few days to manage that which will end up a loss for the business."

Typically a steady stream of traffic would drown out the sound of gunfire ringing from the nearby military training grounds in Waiouru, but apart from the odd freight truck, the service town is now empty.

Christle Pilkington is in town helping her parents run the Welcome Inn. 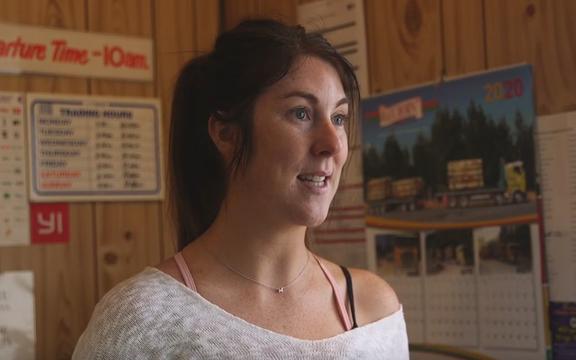 "Usually we're a very busy motel, lots of traffic coming through being on a key transport route. Things like the army and Desert Storm tend to generate a lot of visitors."

In the past two months only a handful of essential workers have stopped for a night at the Inn.

The family business has lost dozens of bookings and tens of thousands of dollars.

"During the Covid-19 shutdown period we've lost $43,500 to date. We're unsure what the follow-on from here is going to look like. Obviously, business is much slower, gatherings are limited to ten people so we're likely to lose a lot more revenue than what we've seen so far."

All of the businesses RNZ visited on State Highway 1 are hopeful New Zealanders will travel to the central North Island this winter, but expect they will continue to struggle until borders re-open.