Food businesses say their perishable goods are spoiling as courier drivers are run off their feet. 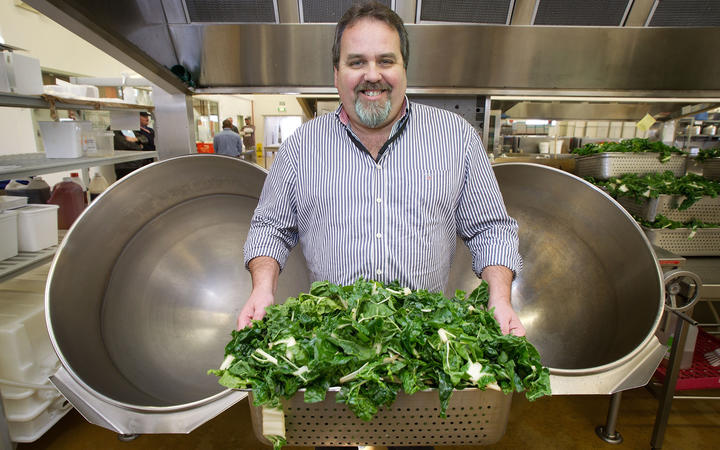 Martin Bosley posing in the kitchen where he helps inmates from Rimutaka prison put on a fine dinning experience in the Upper Hutt area of Wellington in 2013. Photo: Marty Melville / AFP

One courier firm, Aramex, has just launched an app to recruit enough drivers to cope with the surge in demand.

But the situation has become so bad for one supplier that he has now suspended out of town deliveries and taken it upon himself to get orders to customers.

Wellington-based chef Martin Bosley is also a fish supplier, but lately, about a quarter of his deliveries are not reaching customers.

"Yesterday alone we lost over $250 worth of oysters. When they arrive there they're hot, they're not good," Bosley said.

"We don't get any compensation for that. We can't claim off the courier company."

It is standard for courier company to accept no liability for perishable goods, he said.

In some cases, fish is picked up then it vanishes, with no way of tracking it, he said.

"We had 20 kilos of fish just go missing. Like not being delivered late, it's just gone missing. Did the unicorn come and take it? I keep saying there must be unicorns and rainbows where you live, because in the real world, they don't just magically disappear like this."

Bosley said the problems were costing him thousands.

He has now suspended out of town deliveries and taken it upon himself to get orders to customers.

The company he used is owned by courier giant Freightways.

No one from Freightways was available to be interviewed. But in a statement, a spokesperson said Freightways had "addressed ... the customer directly and resolved any misunderstandings he had around the service".

In Whakatāne, an organic vege grower is also having trouble with his fresh produce arriving on time.

Jim Bennett, who owns Te Aranga Organic Gardens, said he sent two parcels to Auckland last Thursday - one of which was sent to the wrong depot.

"The other carton was totally perishable and going to Commonsense Organics in Mt Eden. That arrived on Wednesday - seven days, by which time the tamarillos in the box were mushy and rejects. The courgettes, remarkably, did survive."

Its chief executive Scott Jenyns said drivers were trying to prioritise perishable goods, but the sheer volume of deliveries was the biggest challenge.

"I think couriers country-wide - not just Aramex - are doing their best to ensure New Zealand keeps moving and they're trying to do it in a safe and friendly environment.

"I know we are letting some customers down. It's important to keep the dialogue open and again we will get on top of this. At the end of the day, I think it's a really healthy sign that people are buying and trading, and businesses are coming back online."

He said physical distancing measures were also slowing down delivery.

Jenyns said Aramex was actively recruiting drivers via an app it had launched, called Blu Couriers, to try to help with the demand.

The app works a bit like Uber, and runs potential drivers through a 30-minute online training programme.

Once they've done in-house health and safety training they can be out delivering parcels.

In Hawke's Bay, wine retailer Advintage has been fielding calls from customers wondering where their wine is.

Owner John Macpherson said the delays were leaving customers grumpy - particularly in cases when the order was only travelling up the road.

"We're based in Havelock North. We've had customers who have been eight of nine days getting deliveries into Hastings on the Havelock North side - three kilometres away," Macpherson said.

"It's getting there eventually, but they just haven't been able to cope.

"We've been selling stuff online for 21 years, this is by far the worst situation we've seen."

Those on both sides of the fence are hopeful a shift to alert level 2 would ease pressure on all sides.