Business confidence has taken a turn for the worse amid growing talk of slowing growth and gloomy world outlook. 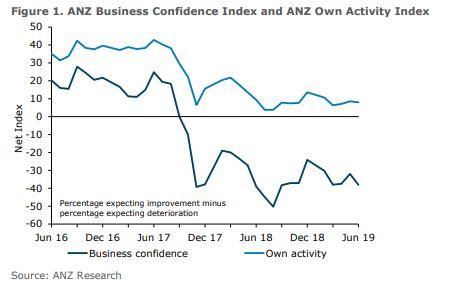 The ANZ Business Outlook for June shows a net 38 percent of businesses expect conditions to deteriorate in the year ahead, from 32 percent last month.

ANZ's chief economist Sharon Zollner said the outlook for the economy was murky, with the prospect of a squeeze in getting credit, rising costs, as well as the international outlook.

However, she said there were positives such as low interest rates, a strong job market, and good export prices.

"As things stand, there is no reason for the economy to fall into a deep hole."

Among the survey's other indicators, more firms expected their profits to fall, more businesses were feeling the pressure of higher costs and but struggling to raise their prices, while the number of jobless is expected to rise.

The slowdown in the economy and the growing global risks have been remarked on by global heavyweights groups this week - the International Monetary Fund and Organisation for Economic Co-operation and Development.

"Upside risks to growth appear few and far between and with the inflation outlook not consistent with the target midpoint we expect two more OCR cuts this year," Ms Zollner said.