Recent improvements in business confidence have run out of steam in the latest ANZ Bank monthly survey. 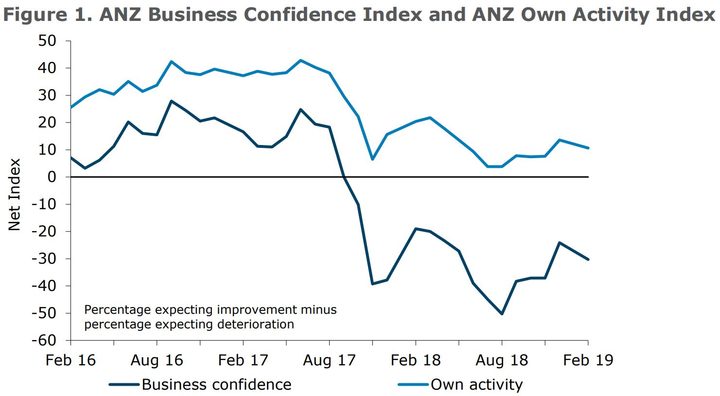 The headline number has fallen to a net 31 percent of firms expecting general business conditions to get worse over the next year, from 24 percent before Christmas.

The more closely followed "own activity" measure has also retreated, with a net 10 percent optimism level from just under 14 percent.

Business confidence had been slowly improving towards the end of last year after hitting decade lows, but the gloom appeared to be returning.

"Anecdotally, the regional economy is booming, but there does seem to be a degree of wariness amongst firms," chief economist Sharon Zollner said.

"Increasing evidence of a global slowdown is likely playing a part, as well as the uncomfortable combination of elevated costs but limited ability to pass these costs on, which is impacting firms' profitability."

The survey showed firms were expecting their profits to be hit, exports to fall, to invest less, and not hire as many staff.

"If we don't see a marked bounce-back soon, the investment intentions and capacity utilisation data imply downside risk to economic momentum ahead, even allowing for possible political impacts in the data," Ms Zollner said.

Wellington and Bay of Plenty were the most optimistic regions, while Canterbury was the least optimistic.

The agriculture and services sectors were the most upbeat about their own outlook, with construction the least.