Latest - Tourism Holdings has revised down its profit forecast for this financial year after hitting trouble selling campervans in the United States. 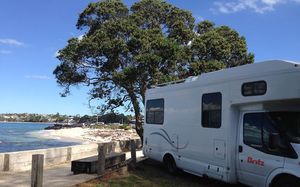 Its net profit after tax will be between $25 and $28 million for the June year from an initial forecast of $32m.

Tourism Holdings' American operations account for about a third of its business.

The car auction and finance company says its full year profit is running to expectations with an improved fourth quarter trading performance.

The company expects its underlying profit to come in just above the midpoint of its previous guidance at $32 million for the year ended in March, excluding $4.5m of one-off costs associated with the rebranding of Buy Right Cars.

The survey reveals a net third of small businesses are pessimistic about general business conditions, but that's an improvement on the September quarter when a net 44 percent had a negative outlook.

Martin Stewart took over the running of the company in February and will now also fill a casual vacancy as a director which was left vacant by the former chief executive John Fellet.

Trade Me taken off stock exchange

Trade Me Group will de-list from the stock exchange at the end of trading on 2 May after its takeover by British firm Apax Partners.