Developers are scrambling to keep big projects on track with leading builder Arrow International in strife and subcontractors abandoning its construction sites. 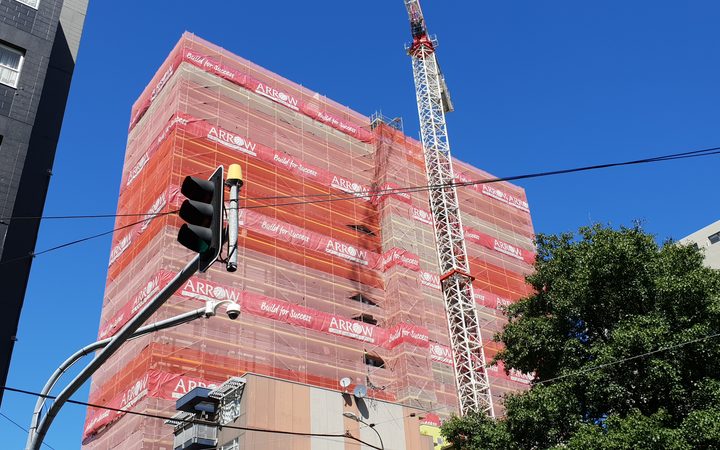 The Christchurch headquartered construction company, which employs 250 people, is in voluntary administration.

Some developers are moving to take over as lead contractor entirely, while others wait to hear just what is going on.

Arrow's board said the company would try to finish off its current projects but Wellington developer Mike Cole of Vicinity is not waiting for that.

He has had a head start in trying to dodge the fallout from the latest crash in the volatile industry.

"We could observe a few things going on, so we've been working towards something to protect [sub contractors'] interests," he said.

He is moving to take full control of the 20-storey apartment project in the central city, which has the roof on but is unfinished inside.

He was confident work could restart in a day or two if the administrators agreed and sub contractors returned.

"Understandably some people may not come back ... I've just finished meeting some of them and explaining the situation and they're very appreciative."

At other Arrow projects he was familiar with, he said hopefully "they should be taken care of as well".

Meeting with sub contractors yesterday, Mr Cole said he was unable to reassure them enough to prevent them from grabbing their tools and going, fearing their gear would get locked up.

A similar move is being made in nearby Vivian Street, where Stuff reported the Chow Brothers were keen to finish off a hotel Arrow was building for them. The Chow company has not returned RNZ's calls.

But at Hawke's Bay Airport, where sub contractors have left with the expansion project partway through, matters are less clear. Operations manager Dean Smith said they had not heard from Arrow yet, and until they did would not say what their plans were.

Civil Contractors New Zealand said the strife at Arrow showed the industry had become too unstable, given it was one of the country's best builders of high-rises.

Litigation was increasing as the pressure went up, said federation chief executive Peter Silcock. For Arrow, an adjudication over a disputed Auckland project that went against it broke the camel's back.

"Clients are trying to transfer risk and get the lowest price, also contractors taking that on, so contractors need to be smarter," Mr Silcock said.

Wellington developer Ian Cassels used Arrow recently on a five-storey Xero project in the capital with no problems.

"I wouldn't for a moment say that Arrow was badly run, I'm just saying you get stresses associated with a lot of work," Mr Cassels said.

He did not foresee more dominoes falling necessarily, with many small to medium companies in good shape; it was the larger ones juggling many projects where the deeper problems were, he said.

In Canterbury, where Southern Response has been using Arrow to do quake damage assessments, it said it would work with the administrators and there would be no change to customer services.