Analysis - Has fortress Sky Television suffered the first major breach in its defences?

If not, then the news that it's not the preferred bidder for the New Zealand broadcasting rights to next year's Rugby World Cup will have given the foundations a damn good shaking. 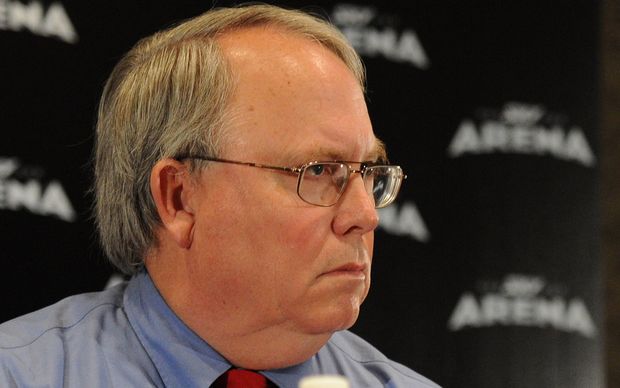 "We have been informed that negotiations are under way with the preferred party, and our bid remains in play should those negotiations fail," the pay TV operator said in a statement to the stock exchange.

"Sport broadcasting is a competitive business, and while we are disappointed not to be the preferred bidder, it's an economic reality that we can't have every match of every sport that New Zealanders like to watch."

In fact Sky TV has only the broadcast rights to the tournament once - in 2015. It shared the rights with Māori TV and TVNZ in 2011, while TV3 held them in 2007, and before that they were with TVNZ.

But that's not the issue. This is set to be a significant failure to capture a major sporting event, which is core to Sky's survival. It shrugged off the loss of English Premier League football, but rugby is a different story in New Zealand.

Chief executive John Fellett announced this week he would step down after 27 years with the company. He told RNZ that Sky is in transformation, but has strengths such as its access to prime content whether it be Game of Thrones or All Black Tests.

"There's still a role for an aggregator, someone you can go one-stop shopping to go and get what you want and our goal is to be that aggregator."

Sky is putting a brave face on the latest news. It said it's still in with a chance, if the preferred bidder - believed to be a Spark-TVNZ partnership - does not succeed.

"SKY Sport's business is built on offering sports fans their favourite matches on a week-in week-out basis over multiple years. Our customers will continue to enjoy the Super Rugby, Mitre 10 Cup, and All Blacks tests, including the lead-up to the Rugby World Cup," it told the Stock Exchange.

But in a lengthy presentation to investment analysts this week it said it will start talking to Sanzar about the rights to cover the Super Rugby competition.

"Negotiations should start this year. (It's) strategically important. Nothing to gain by discussing plans in public," a bold-lettered slide said.

The presentation also outlined the audience segments it needed to win ... and just as importantly, retain. The must hold groups were dubbed "fanatical" and "habitual heartlanders".

If Sky starts losing premier content such as rugby, then how long before it starts losing the free-spending, loyal "heartlanders".

"It's certainly a blow for this company," Jeremy Sullivan of broking firm Hamilton, Hindon, Greene said.

"They need to find a new CEO, implement that strategy, and don't lose those Sanzar rights."

If a Spark-TVNZ joint bid wins the Rugby World Cup rights, it will only be a matter of time before they and other providers, such as the deep-pocketed Amazon, look to pinch the other jewels in Sky's sporting crown.