The New Zealand Superannuation Fund is among a group of powerful investors putting pressure on the world's biggest polluters to reduce their greenhouse gas emissions. 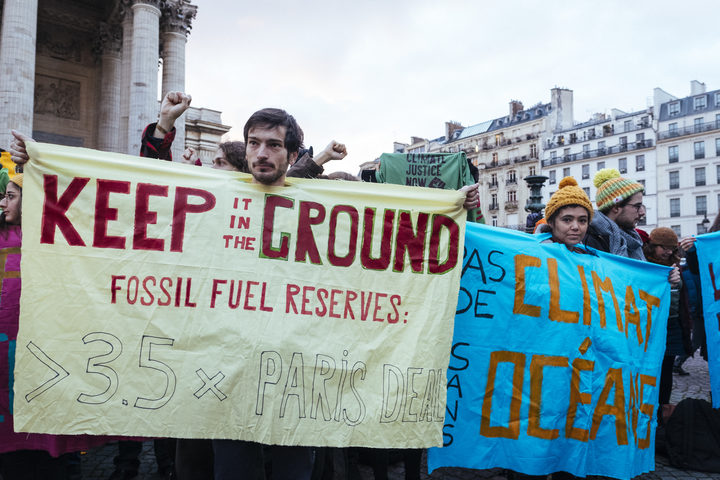 Campaigners in Paris urge companies at the summit to phase out fossil fuels. Photo: AFP

The global campaign, dubbed Climate Action 100 plus, was launched at the One Planet Summit in Paris marking two years since the signing of the Paris Climate Agreement.

They include ExxonMobil, General Electric, and Rio Tinto.

Investor Group on Climate Change chief executive Emma Herd said investors were trying to force these companies to clean up their act by engaging with them.

"It would be a pretty brave company that would say 'no' to $26 trillion of assets under management."

Companies' performances in this area would be reported on each year so their improvements could be tracked, she said.

"We'll be able to see just how effective investor engagement is."

The failure to include agriculture and livestock emissions into the campaign was also a lost opportunity, she said.

New research published last month showed livestock was directly responsible for about a quarter of industrial-age warming - and that did not include emissions from crops grown to feed them.

The New Zealand Super Fund has already quit or substantially reduced its investments in 300 fossil fuel companies as part of its own climate change strategy announced last year.

But it still has just over $1bn invested in 86 of the companies being targeted by the new campaign, and while it was ditching fossil fuels, it's was buying up beef and dairy farms in New Zealand and Australia.

NZ Super Fund chief investment officer Matt Whineray said the 100 campaign was about "getting the largest emitters to get serious about climate change".

The fund was still reducing its carbon footprint even if it continued to invest in livestock, he said.

"They're a relatively small part of the portfolio and what we've found in our analysis is that the biggest impact we can make is through our listed equities, which is why we've started there."

No internationally binding commitments will be made at Tuesday's "One Planet" summit.

In focus is how public and private financial institutions can mobilise more money and how investors can pressure corporate giants to shift towards more ecologically friendly strategies.

Some 50 world leaders and ministers are in Paris, including Mexican President Enrique Pena Nieto and leaders of states at the sharp end of climate change such as Chad, Bolivia and Haiti.

The United States has sent only an official delegation from the Paris Embassy, but California Governor Jerry Brown, leader of the world's sixth largest economy, and celebrities Leonardo Di Caprio and Arnold Schwarzenegger, are championing more action.