US oil explorer Anadarko is pulling out of New Zealand, but one of its partners is understood to be looking at picking up the slack. 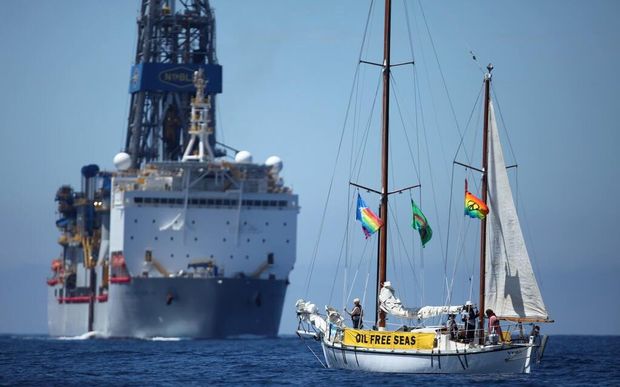 An Anadarko drill ship and a Greenpeace protest boat off Taranaki in 2013. Photo: GREENPEACE

The company has a permit to search for oil and gas in waters off the east coast of New Zealand between Oamaru and Dunedin.

Anadarko had already given up permits further north, and said the price of oil was too low to make deep sea operations worthwhile. It said similar projects were being halted in other countries.

Anadarko has been carrying out the operational search as part of a consortium that includes Australia's Origin Energy and English oil firm Discover.

The remaining partners are able to carry on if they want to, meaning quest for oil and gas off the East Coast of the South Island is not dead yet. It is understood Origin wants to take up the slack.

The Ministry of Business Innovation and Employment would not comment, but confirmed it received a formal request to change the conditions applying to the search.

It is understood this would extend a deadline for the first exploratory well past January next year.

No comments have come from Origin, whose oil and gas arm has been renamed Lattice Energy Resources.

Any extension of the deadline would give the company the chance to consider its position.

Although brent crude oil has inched up to $US64 a barrel on world markets, this is still little more than half its level of five years ago.

Deep sea oil drilling is thought to need prices of well over $US100 a barrel to be worthwhile and the chances of a recovery to those prices are believed to be very small.