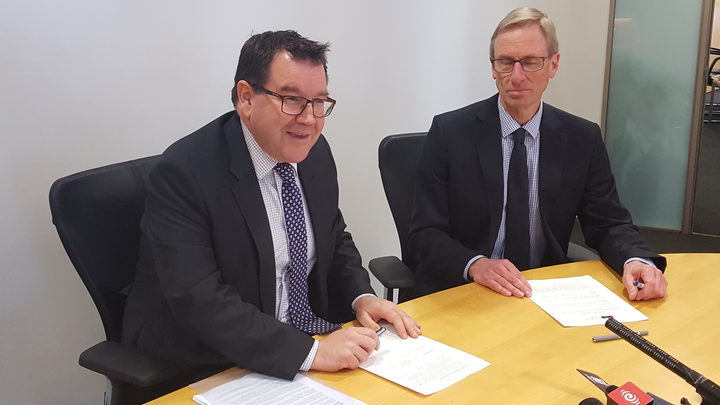 Finance Minister Grant Robertson has started the ball rolling to change monetary policy so the Reserve Bank has to take employment into account when setting the official cash rate.

He has also re-signed the current policy agreement which sets inflation targets, to give financial markets some certainty.

At the moment the Reserve Bank has a target of keeping inflation between one and three percent when setting the official cash rate, which then influences bank interest rates.

In their coalition agreement Labour and New Zealand First agreed on a review to give the Bank a broader focus, namely maximising employment].

Mr Robertson said that will sit alongside inflation targets, but there would not a numerical target set on employment rates.

"It's core to this government that we want New Zealanders to be in work and to be paid well for the work that they are in, that's the focus I've taken into this and I think it's important that we follow through."

These changes were not about the government wanting more control over the Reserve Bank, he said.

"The operational importance of the Bank is very important and we want to protect that, what this is about is being clear about the objectives we have for monetary policy."

There will be a two-phase review.

The first will look at how best to implement the new employment requirement, and provide for a committee to make decisions about monetary policy.

The second phase will examine the other activities of the Reserve Bank.

An Independent Expert Advisory Committee will carry out this work, with legislation changes planned for early next year.

Christian Hawkesby of Harbour Asset Management said the expanded mandate to include employment should pose no problems.

"It really gives the Labour government something to point to directly to put some political pressure on the Reserve Bank just to ensure they are focusing on the labour market in the way they should," he said.

The Reserve Bank Board is in the process of appointing a new Governor, and Mr Robertson has been in contact with the chairperson about that.

Finance Minister Grant Robertson has been given an assurance by the Reserve Bank Board that whomever they appoint as the new Governor will carry out the changes required by the new government.