House values are growing at their slowest in five years, the latest data from Quotable Value says. 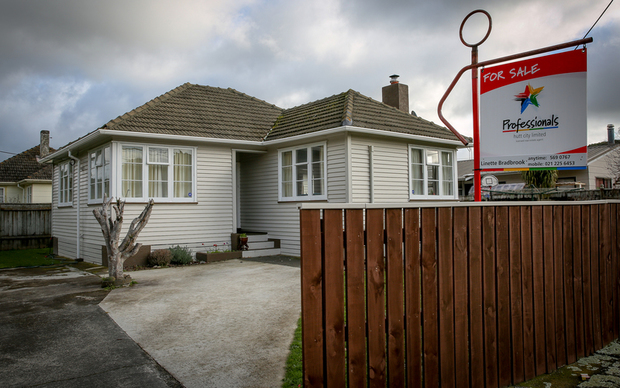 The usual spring pick-up in house prices may be delayed until after the election, QV says. Photo: RNZ / Alexander Robertson

QV has released its August figures showing values increased 4.8 percent over the past year - the slowest annual rate since August 2012.

The nationwide average value is now $641,648, almost 55 percent higher than the previous market peak of late 2007.

There were falls in suburbs including Rodney North, Papakura, Franklin, Waitakere City, and parts of Manukau and the North Shore.

Values rose in other parts of the city including central suburbs, and also Waiheke Island which saw the highest rate of growth up 3.9 percent in the past three months.

Though the Auckland market has been stalling several months, the average price in the country's biggest market is $1,041,957, around 90 percent higher than the previous peak in 2007.

QV national spokesperson Andrea Rush said the election was adding to uncertainty, and the usual spring pick-up may be delayed.

Quarterly growth dropped in the Wellington region, but values rose in most other parts of the North Island including Hamilton and Tauranga.

Markets in Hawkes Bay, South Wairarapa and Masterton continued to rise as people moved out from Auckland and Wellington looking for more affordable housing and better lifestyle.

Values are flat or decreasing in most parts of Christchurch, while Dunedin slowed to 0.5 percent over the past quarter.

Ms Rush said restrictions on lending were continuing to prevent people from entering the market.

"A lack of listings over winter, LVR restrictions and stricter lending criteria by retails banks have led to a 30 percent drop in market activity and sales volumes compared to the same time last year," she said.

"It's likely the annual spring upturn in the market may be slower to arrive, given the pending election, but with the underlying drivers of a lack of supply and high net migration particularly in Auckland still remaining, it's possible that values may begin to rise again more steadily in the new year."

A tightening of in China's policy on capital leaving the country may also be having an effect.

"It's possible the crackdown by the Chinese government on the amount of capital allowed to leave the country may be a factor, as it's now much harder for new migrants or foreign buyers from China to get their cash out to purchase property," she said.

Ms Rush said values may begin to rise more steadily from 2018 because of high net migration fuelling the demand.

Research company CoreLogic's Property Market & Economic Update Report for August suggests a bleak end to the winter season, with sales volumes down 20 percent on last year, while property values have fallen over parts of the country, including some Auckland suburbs.

It suggests the housing market will likely remain subdued into early next year.

Outgoing Reserve Bank Governor Graeme Wheeler suggested this week that there should be no rush to ease the loan-to-value restrictions.