Fairfax Media and NZME are considering appealing the Commerce Commission's rejection of their proposed plans to merge.

The commission said the merger between New Zealand's two main news media chains would have concentrated media ownership and influence to "an unprecedented extent". 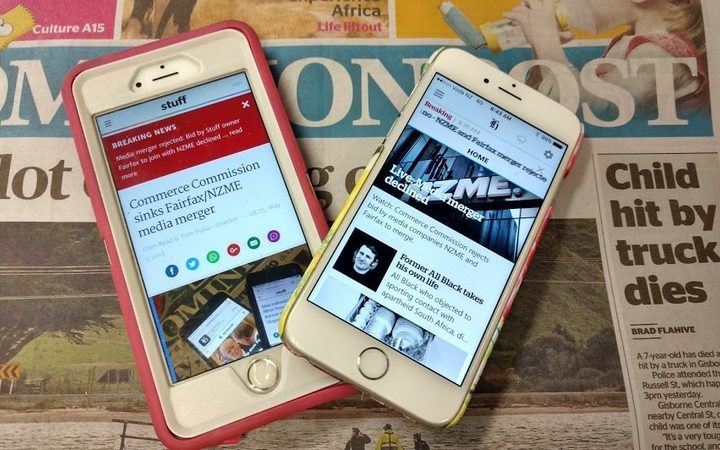 It released its final decision on the proposal this morning, after several delays.

It confirmed its preliminary decision, released in November, saying its views since then were "largely unchanged".

"This merger would concentrate media ownership and influence to an unprecedented extent for a well-established modern liberal democracy," commission chair Mark Berry said.

"This level of influence over the news and political agenda by a single media organisation creates a risk of causing harm to New Zealand's democracy and to the New Zealand public."

NZME chief executive Michael Boggs told Checkpoint with John Campbell it would scrutinise the commission's rationale for taking those effects into account, and was considering an appeal.

Mr Boyle said individual newspapers and editors were given freedom to express their own perspectives, and that meant there would still be a plurality of voices.

Fairfax owns many of New Zealand's metropolitan newspapers, including the Sunday Star-Times, The Press and The Dominion Post; magazines including Cuisine and NZ House & Garden, and the website Stuff. NZME owns The New Zealand Herald, regional and community papers and a stable of radio stations, including Newstalk ZB and ZM.

The companies had argued that a rapidly changing media market driven by digital technology was eroding the economics of their businesses and they needed to merge to survive in the long term.

They said the biggest issue was the emergence of Facebook and Google as news competitors.

In an email to staff, Fairfax chief executive Greg Hywood said the commission's "failure to grasp the commercial and competitive realities of modern media is disappointing".

"This decision does nothing to address the challenge of the global search and social giants, which produce no local journalism, employ very few New Zealanders, and pay minimal, if any, local taxes."

An even greater focus on "cost efficiency" would be needed now, Mr Hywood said.

Speaking to Nine to Noon earlier today, Mr Boggs said the company was disappointed by the decision and Fairfax was "as surprised and disappointed as we were".

He said the commission was wrong about the effect a merger would have on the plurality of voices.

At the commission's own news conference to announce the decision, there were at least 10 different media microphones visible on the podium, Mr Boggs said.

Both companies were now considering the decision in detail and Mr Boggs said they had 20 business days to decide whether to appeal.

Alternatively, NZME could be interested in buying some of Fairfax's smaller assets if it divested them, he said.

Both companies had threatened to cut back their investment in front-line journalism if the merger was knocked back, including regional and community reporting.

"However, the commission disagreed with some of the scenarios they put forward about their respective futures without the merger," Dr Berry said.

"In our view, without the merger, NZME and Fairfax will be increasingly focused on their online businesses as their print products diminish in number and comprehensiveness over time."

There was a "real chance" a merger could have extended the lifespan of some newspapers, Dr Berry said.

"However these benefits do not, in our view, outweigh the detriments we consider would occur if it was to proceed."

A merged entity would have employed more editorial staff than the next three largest mainstream media organisations combined, he said.

"The basic concept is, the more companies you have operating, the more opportunities there are for journalism. This would have become a very slimmed-down operation, which would have cost quite a number of jobs."

Including its radio network, the merged Fairfax/NZME entity would have had a monthly reach of 3.7 million New Zealanders.

The commission was originally due to give its decision in mid-March but delayed doing so twice, after the two companies provided extra submissions.