For the first time in more than two and a half years, the key whole-milk powder price is above the average break-even point for New Zealand farmers.

The whole-milk powder price, which determines farmers' end-of-season payout, leapt by 19.8 percent to to $US3317 a tonne.

Farmers generally need $3000 a tonne to break even.

And the overall global dairy price has surged ahead with an average increase of 11.4 percent at the latest overnight auction.

It is the second consecutive rise and the strongest gain since August, with the price set at $US3327 a tonne. 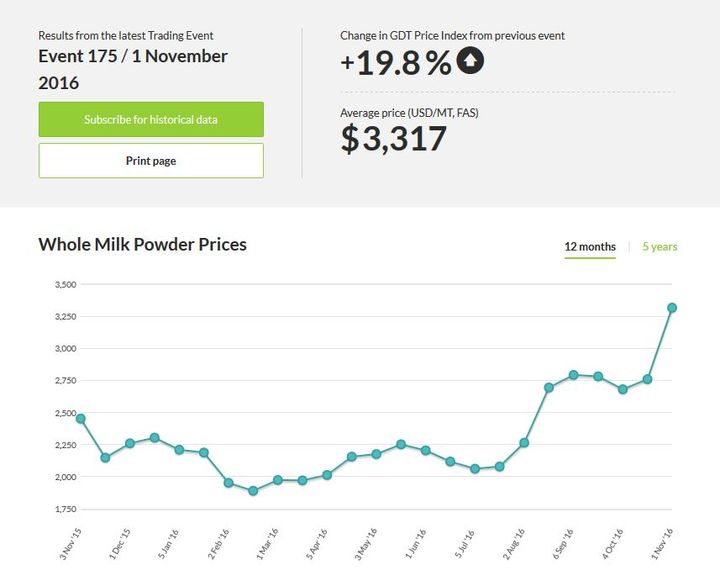 He told Morning Report global supply has been dropping off and farmers have been waiting for prices to lift.

However, even if the payout went up, it would take a while for the money to get through to farmers.

"Hopefully banks will continue to be patient seeing that there is light at the end of the tunnel and things are getting better.

"So it might mean that a few farmers that banks were applying pressure to, that it was time to sell up ... they might hold off and give them a chance to rebuild their equity basis."

Fonterra chairman John Wilson said it was a very good result, and if prices continued to rise, farmers could expect a higher payout.

But he told Morning Report it was too early to pop the champagne corks.

"We'll watch this carefully in the coming months.

"I think the underlying point here is that 14 percent less milk production in the Waikato region, about 12 percent in the lower North Island, right across the country we are down on last year.

"It's been an incredibly difficult spring, so it is difficult on farms still," Mr Wilson said.