Fonterra has raised its forecast payout to farmers by 50 cents to $5.25 a kilo of milk solids, after another rise in dairy prices this morning. 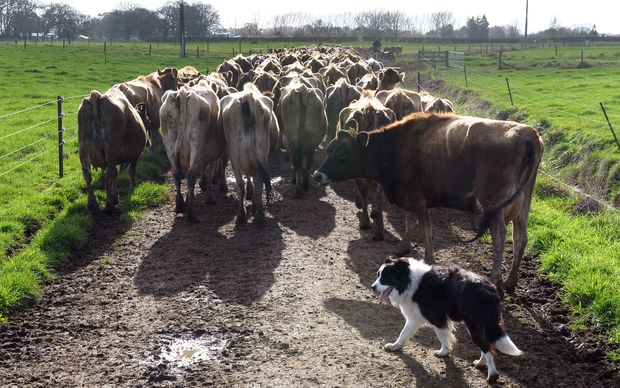 Most farmers need about $5 per kilo of milk solids to cover costs.

Dairy prices rose for a fourth consecutive auction earlier today, with prices up by almost a third since August.

At the overnight auction, the average price climbed 1.7 percent to $US2975 US dollars a tonne. The all important whole-milk powder price fell fractionally to $2782 a tonne. Dairy farmers are estimated to need an average of $3000 to break even.

Fonterra said when combined with the forecast earnings per share range of 50 to 60 cents, the total payout available to farmers in the current season is forecast to be $5.75 to $5.85 before retentions.

Chairman John Wilson said that since the co-operative last reviewed its forecast price in August, global milk supply had continued to reduce and demand had remained stable.

"Milk production in key dairying regions globally is reducing in response to low milk prices. Milk production in the European Union for 2016 is beginning to flatten out and our New Zealand milk collection is currently more than 3 per cent lower than last season."

But Fonterra has warned that the stronger New Zealand dollar offset much of the gains in dairy prices, and the global market remained volatile.

A rural economist at ASB Bank, Nathan Penny, said the extra 50 cents was likely to add nearly $1 billion to the economy.

But he expected farmers to be cautious.

"With an extra 50 cents in hand, they (farmers) are unlikely to rush out and start spending again. We expect them to be quite prudent with this extra 50 cents and things like debt repayment will be high on their priority list," he said.

Mr Penny said he was still expecting a farm-gate price of $6 per kilo of milk solids by the end of the season.

"Bit surprised by the announcement today, it's good for morale, so everyone's pretty pleased to see the direction of travel that everything is moving in, but the reality cash-on-hand situation won't change dramatically."

Prices for all the other products sold at this morning's auction rose.

Dairy prices have risen nearly 32 percent since August, and are at their highest level since March 2015.

The volume of produce sold at the auction fell nearly 5 percent, and the weaker production has helped underpin prices. 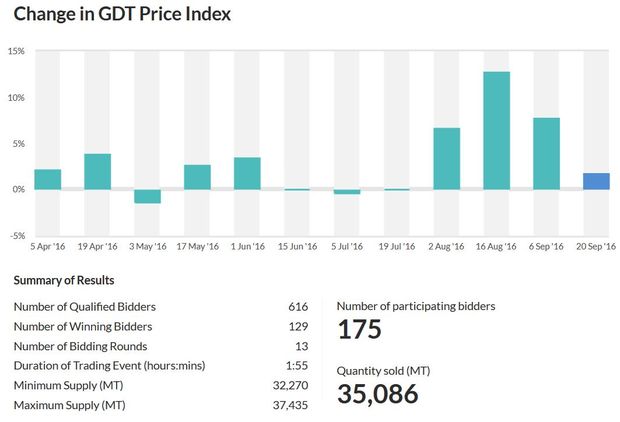 Local dairy companies have raised their forecast payouts for the current season to $NZ5 a kilo of milk solids or higher because of the higher prices.

However, they have also cautioned against expecting the strong gains to continue for the rest of the season.

The prices in the latest auction were below expectations, as signalled in dairy futures contracts, and a rural sector advisor said the outlook remained brittle and uncertain.

"It does give a sense of stabilisation, but we do need to be conscious that the same activity happened last year and was followed by a sharp decline (in prices)," said Julia Jones of KPMG.

She said the four consecutive auction increases pointed to the global market getting back into balance, with overproduction falling, demand improving and stockpiles falling.

Ms Jones said the lift in prices would underpin the higher payout forecasts of the dairy companies, and the recent auctions have been a shot in the arm for sentiment down on the farm.

"These four consecutive increases have been fantastic through the most difficult part of the season has just given them that sense that there is a rainbow on the horizon."

A Rabobank farmer confidence survey showed two-thirds of dairy farmers were optimistic about the outlook over the next 12 months, the highest level since 2007.