The Port of Tauranga has reported a slight fall in its annual profit as it has had higher costs and a fall in log exports. 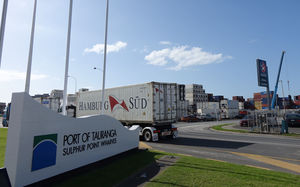 The country's biggest export port made a net profit of $77.3 million compared with $79m a year ago, roughly in line with its own forecasts.

Revenue was down more than 8 percent as it suffered from a sharp drop in log volumes because of weak commodity markets.

However a 12 percent lift in the number of containers being shipped through the port helped to counter the fall.

The port has spent around $350m on dredging the channels into the port and expanding its wharves and storage facilities, which increased costs and dented the profit.

The expansion has been done so the port can take larger capacity container ships, the first of which is due in October.

Port of Tauranga has a stake in the Timaru port company and operates an inland freight hub in south Auckland as it looks to take cargo off its rival Ports of Auckland.