The building industry is welcoming the latest forecast of a record construction boom, but is questioning whether it can keep up with demand.

The forecast says the value of construction will rise to $37 billion next year - and stay at record levels for at least five years.

The findings were outlined in the government's National Construction Pipeline report prepared by Pacifecon and the Building Research Association. 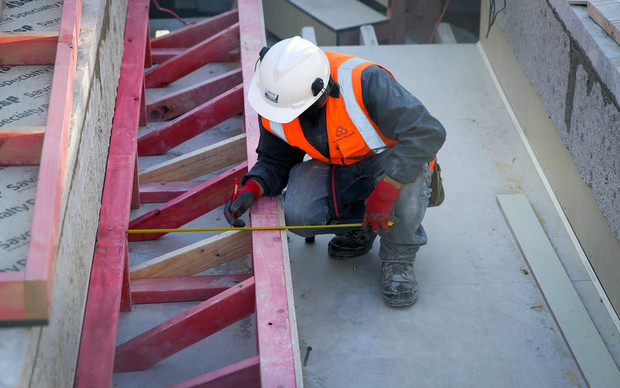 More homes than ever will be built in Auckland, with residential construction projected to reach more than 13,000 homes next year and peaking at over 13,500 in 2018.

It's estimated the city needs around 13,500 built each year for the next three decades if the city is to keep up with demand.

The Minister of Building and Housing, Nick Smith, said it was a very positive report with residential construction particularly strong and activity to remain stronger for longer compared to last years report.

"If we can deliver the sort of scale of home construction that is in this report over the next six years I'm very confident that we'll be on top of the high house price inflation, the increasing rents and the pressure that is particularly on families around getting a good quality roof over their head."

The Certified Builders Association's Grant Florence said with the industry traditionally following a boom-and-bust cycle the extension of the boom was a good sign.

"I think that's great for our industry, I really think that allows our builders and obviously members of my association to plan, to plan better, maybe make more investment in their business, employ more people if they can get them and look to capture and work on delivering those houses within the boom."

Mr Florence said the industry was already playing catch-up with many already struggling on the current workforce.

"We've got a skills shortage and we have other shortages that are appearing. I think this report gives us a challenge and it's a good challenge for us to do that.

"I think what it also does it sort of sets a new norm. I think over the past years the construction industry in the residential sector has thought 'well if we're doing maybe 22,000 consents a year then we're doing OK'.

"I think the new norm is going to be north of 30,000 consents so that produces a real challenge for us and one I'm sure the industry will grab hold of and work its way through."

It was released at the same time as a report on the future demand for construction workers that showed an extra 49,000 people would be needed to work in construction-related occupations by 2021.

That would mean more than half a million people would be in the industry, with more than a third being in Auckland.

The head of the Building and Construction Industry Training Organisation, Warwick Quinn, said Auckland was already struggling to meet labour demands and was falling short of building enough homes.

"While we're at record levels of number of trainees - the highest number we've ever had, we're still well short of where we think we need to be."

Mr Quinn said at the moment less than 10,000 homes were being built annually and that figure needed to rise to 13,000, and permanently, given Auckland's population growth.

"There's a pile of work in front of us and as a result of that not only do we need a much bigger workforce, we need a much greater number of people in training as well in order to make sure our long-term sustainability is there," he said.

Fletcher Building is currently interviewing people in the UK to work here but is confident it will be able to serve demand.

"We're confident with the training and recruitment locally and the odd bit of specialised recruitment that we do from offshore that we can serve the industry that we've got," Mr Darlow said.

He said the reports gave people confidence to get into the industry but also worked to make employers look to expand.

"It gives companies like ours the confidence to invest in the future, so that's around recruiting and training people and getting our plant and equipment and all that established.

He said the country now had the largest ever workforce and with another 38,000 people in training he was confident the workforce would be able to deliver through the boom.