An Auckland manufacturer in business for 40 years says his thriving firm could topple overnight if there was a sharp change in the exchange rate. 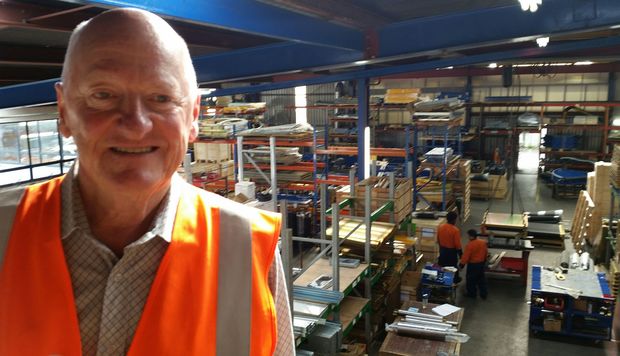 Sir Ken Stevens, founder and executive chairman of Glidepath said manufacturing was thriving in Auckland, despite recent news that Fisher and Paykel would be closing its East Tamaki factory and shifting to Asia, putting more than 180 people out of work.

On his factory floor in Glen Eden, west Auckland, Sir Ken, who has been making airport baggage conveyor systems for 40 years, pointed out parts that were being made for Cochin in India.

"We're competitive enough that we can beat the Indians for price and quality."

He said the company was able to compete by being "very smart" and lean but it also had a long track record.

Heightened airport security due to the global terrorism risk boosted business but Sir Ken said that could change suddenly.

"I look every day at the US dollar rate and other rates in the jurisdictions that we're working in and it's a very difficult thing. We can be put out of business overnight if the rate goes fiercely against you."

The firm hedged against currency changes and it was looking at setting up a factory in Asia, but Sir Ken said the "smarts", or the intellectual property, would always stay in New Zealand.

Unlike Fisher and Paykel which produced hundreds of thousands of units, he said Glidepath makes one-off stuff that did not interest Asian manufacturers.

Sir Ken said mass production was not doomed but it would be "selectively based depending on where the exchange rate is of the day".

Auckland Chamber of Commerce head Michael Barnett said manufacturers had to find niche markets because they could not compete with Asia's low labour costs in the mass market.

"For as long as it's the labour costs that's making us uncompetitive, then New Zealand's going to move away to more niche markets and markets that better represent our capability."

Statistics showed manufacturing in Auckland rose after a slump in 2009 during the global financial crisis and was worth $2.1 billion in the first quarter of 2015 but its share of the city's GDP has not grown.

Michael Barnett said manufacturing was still important but it was no longer about sheets of metal and assembly lines.

"It's around food and beverage and we're getting better with the equipment that we use and the processing in order to satisfy our export markets."

Bill Newson, national secretary for the union E Tu, said manufacturing was buoyant in some sectors but he had dealt with redundancies in 37 workplaces in the last six months, some in Auckland.

He said workers were not getting a good deal with their new jobs.

"We had quite a significant redundancy recently where WINZ (Work and Income NZ) did find 30 replacement jobs, which is good but every single one was less than 40 hours work per week and was on minimum pay and was casual."

Sir Ken Stevens said manufacturers who wanted to succeed needed an export component to their business, so they were not shackled to the local economy, which would leave them vulnerable in a slowdown.