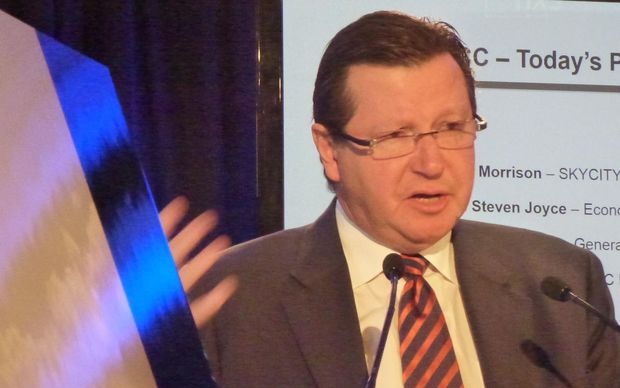 Nigel Morrison is to leave SkyCity at the end of the month. Photo: RNZ / Todd Niall

Mr Morrison, who joined SkyCity in March 2008, will leave on 29 April and be replaced in the interim by the company's chief operating officer, John Mortensen.

Chairman Chris Moller said Mr Morrison had done an "excellent job" for the company through a period of considerable change.

He said they had been talking about the future and they had agreed it was the right time for him to leave.

"It's an incredibly demanding job and after eight years, I'm keen to take a break," said Mr Morrison.

"The company is in great shape with record revenues and profits and an eight-year record high share price, with a market capitalisation of $3 billion."

SkyCity shares briefly rose after the announcement of Mr Morrison's departure, but last traded down eight cents - or 1.6 percent - at $4.87.

During Mr Morrison's tenure the company, which dominates the local casino sector, has revamped the flagship Auckland casino and expanded its Australian business.

SkyCity runs four of the country's six casinos - in Auckland, Hamilton and two in Queenstown - and two in Australia.

He has also driven the company's involvement in the International Convention Centre (ICC) in Auckland, which is going to cost the company close to $500 million, and it is spending around $A300 million to upgrade its Adelaide casino.

Last October, Mr Morrison told RNZ Business that Sky would probably sell one of its Auckland hotels once the ICC was completed, and there has been market speculation that SkyCity might also want to sell other non-core assets, such as the under-performing Darwin casino.

The company's first half profit to the end of December rose 30 percent to $71 million, at the top end of expectations, driven by higher earnings from rich overseas gamblers.