Bunnings workers have been given suspension notices after taking off their signature aprons during an employment dispute, their union says.

First Union announced this morning that staff in 29 stores across the country would take off their aprons and wear union stickers instead. Workers would not put the aprons back on until a collective agreement was settled on.

Bunnings wanted to change the way rosters were set, it said.

But a short time later First Union retail and finance secretary Maxine Gay said the hardware chain started giving suspension notices to some of those workers.

"I've been absolutely gobsmacked," she said.

"These workers are prepared to carry out all of their duties and simply remove an item of clothing.

"And Bunnings is prepared to lock them out, to take their pay off them in its entirety, for not wearing a pinny - this is disgraceful," she said.

First Union, which has been in talks with Bunnings Warehouse since July, said at the moment hours were set by mutual agreement but the hardware chain wanted to remove this clause. 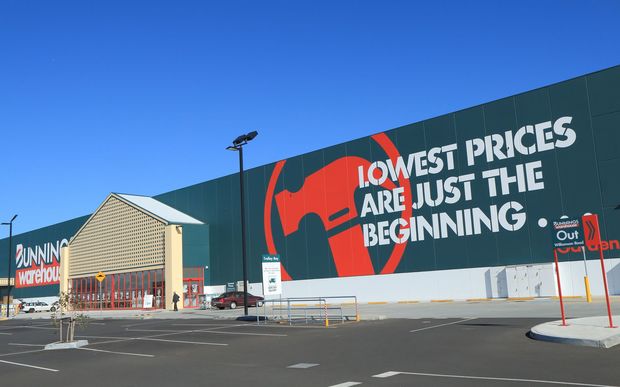 Some staff at 29 Bunnings stores removed their aprons this morning. Photo: 123rf.com

Union organiser Dave Cooney told Checkpoint with John Campbell the company could not provide an example since July of where the current roster method had posed a problem.

"People want to have a say. They don't want to be bullied into being forced to change their hours.

Bunning's response to the union action today was bullying behaviour, he said.

"People have been threatened with suspension, threatened they won't be paid, etcetera etcetera. We think that's totally inappropriate.

"What we want is genuine bargaining where they will actually not just come along and say 'take it or leave it', they will actually bargain properly and explain why they need this change when they've just reported record profits."

Workers who had been given suspension notices have had to put the uniform aprons back on, Ms Gay said

About 800 Bunnings Warehouse workers are members of the union.

"The other thing we are fighting for is the non-union members have got their payrise, and it's been going on for months, and we have been victimised for not getting that increase."

"We are aware that in a few of our stores First Union have approached union team members with a request to engage in industrial action by removing their aprons.

"As with any industrial action, this was addressed appropriately.

"Bunnings remains committed to reaching an agreement with team members who choose to be represented by First Union," Ms Coombes said.