Fonterra's forecast milk payout would be its lowest in 13 years, with the latest drop expected to knock about $400 million from farmers' incomes. 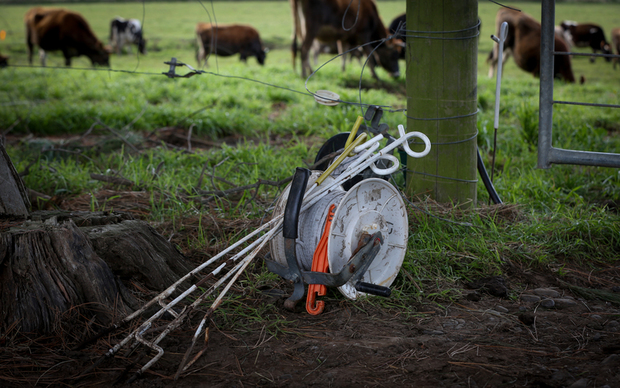 Prices at the twice-monthly dairy auctions have fallen in four of the five events held this year.

Mr Wilson said Fonterra still expected added earnings per share from its commercial activities of between 45 and 55 cents.

He said after retentions that would see farmers being paid between $4.25 and $4.30 a kilo. That would be the lowest payout in 13 years.

The co-operative said there was still a global surplus of dairy products and two of the biggest consumers, China and Russia, had cut their buying.

"This further reduction in the forecast farm-gate milk price is the last thing farmers want to hear in what is proving to be a very challenging season," Mr Wilson said.

He said the latest forecast cut would knock about $400 million from farmers' incomes this season.

Current milk price levels were unsustainable globally, he said, however he did not expect it would change much this year.

Chief executive Theo Spierings said the global imbalance was expected to continue for longer than previously expected and that would weigh on earnings for some time.

"Our forecast is based on no significant changes to either supply or demand globally before the end of the year. However, a reduction in the supply available for export before then could mean prices recover earlier than currently expected," he said.

The New Zealand dollar, which is often sensitive to dairy prices, fell around 0.25 US cents after the announcement, and was also weaker against most other major currencies.

Westpac economist Michael Gordon said he thought the chances of another cut to the payout forecast this season were slim but the latest blow would further dent business confidence.

He said it would also add pressure on the Reserve Bank to cut interest rates to cushion the economy.

Dairy farm debt has reached $38 billion and a recent Federated Farmers poll found more than one in 10 are already under pressure from banks over their mortgage.

Prime Minister John Key said it was a tough time for dairy farmers, and he expected some would go under.

"Well, there will be some. I think overall the bankers are taking a considered and cautious approach to it," he said.

Bank chief executives he had spoken to in the past week had told him they were "not going to rush to force people off farms", but inevitably there would be a few, he said.