The New Zealand dollar fell to its lowest level in more than a year this afternoon after the Reserve Bank said in a statement tat the currency is unjustified and unsustainable at current levels. 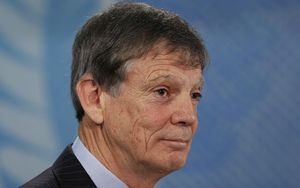 The central bank's governor, Graeme Wheeler, warned that the Kiwi was susceptible to a significant fall. The dollar fell a nearly half a cent on the news, from 80.67 US cents to 80.21 US cents, and was trading at 79.89 US cents early this evening.

The markets responded by selling the Kiwi below 80 US cents, down more than two-thirds of a cent. The dollar has fallen 9 percent since peaking at 88.35 US cents in July this year.

"We've had a pretty big move now - so about 8 cents from the peak in July. I would say that the New Zealand dollar will continue to be capped on any attempts to bounce higher.

"I'd expect the New Zealand dollar to remain under pressure - we're likely to get some attempt to bounce, but I'd expect that to be fairly quickly quashed."

The Reserve Bank statement boosted the New Zealand sharemarket, with the benchmark Top 50 Index gaining 20 points to 5278 by the close of trade today.

Craig Stent, a director at Harbour Asset Management, said the lower dollar would have a positive impact on companies with overseas earnings.

"I guess the key comment to make is the Reserve Bank's come out saying that the exchange rate is unjustified and unsustainable, which could either indicate that there might be some currency intervention at some stage, but we've seen a positive impact today from that and an uplift in Fisher and Paykel Healthcare and some of the other companies that have global earnings.

"Hallenstein's reported their full-year result, which was marginally ahead of the previous guidance they gave ... The trading for the first seven weeks of this financial year are up over last year's results."

Mr Stent said other key movers were in the utilities sector, with Meridian Energy and Mighty River Power both up, and there has been a bit of a bounce back from Ryman Healthcare also.