Finance Minister Grant Robertson presented the government's so-called recovery and well-being Budget yesterday, but some are describing it as anything but. 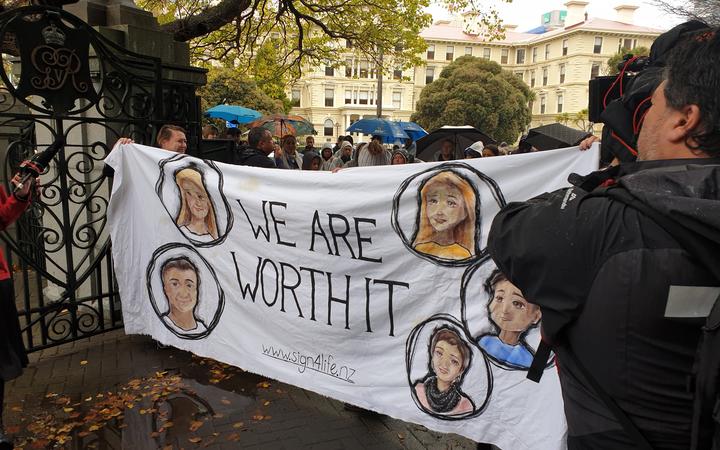 Perhaps the biggest headline is the $3 billion boost for beneficiaries, but there was also more money for Pharmac, district health boards and to fund health and education reforms.

There's a billion-dollar package for Māori, including money to set up the promised Māori Health Authority to provide 1000 homes.

But those hoping for a boost in funding for Pharmac, said they have had their hopes and dreams crushed.

Patient Voice Aotearoa chair Malcolm Mulholland said after the budget announcement yesterday, people were considering leaving the country so that they could get their treatment funded.

The group is a collective of people campaigning for better health outcomes, and just last week members led a hīkoi to Parliament, lying down on the hard concrete to demand a budget increase for drug-buying agency Pharmac.

He believed $200m meant a decrease given the demands on the agency's funds.

"One, at least $20 million will just go on inflation. Two, we also have to account for population growth, and three and the one that the public aren't really aware of is that Pharmac is no longer solely responsible just for medicines they also have, as a part of their remit to purchase medical devices, of which approximately about a third of their budget is sucked up on already, so it actually represents a decrease in medicine funding."

Dr Mulholland said the budget funding ran short of the $400m Pharmac needed to fund a waiting list of more than 70 drugs and a further 200 drugs that had not made it to the waiting list at all.

"There are thousands and thousands of New Zealanders [who] are desperately in need of these drugs and have been for a number of years. Honestly after today's announcement, I really don't know what it's going to take for this government to listen."

He has already received phone calls and texts from patients around the country who said they were desperate to hear today's news, in the hope that their drug might be funded.

"Clearly that's not going to be the case, and so they are now actively looking to leave the country in order to live."

He said it was a matter of life or death.

"If they get the drug that they need then they can either live well or live if they don't. Many of them will simply die, and that's the cold hard reality."

"For this government to get up there and say you know this is a 'well-being budget', nothing could be further from the truth for these people and I just don't know quite what it's going to take for Robertson and Ardern who want to get up on the world stage and say that they've been kind to actually listen to the needs of the people and give Pharmac the money that they need."

Patient Voices Aotearoa has petitioned the government, calling on them to double Pharmac's budget and triple it within two years to bring it into line with other developed countries.

Health Minister Andrew Little said the group was using extremist rhetoric and the government had consistently increased funding for Pharmac.

But Dr Mulholland thought this year's budget showed that the government had their priorities "back to front."

"I would have thought that the first priority for any government, let alone the New Zealand government, is actually giving their people the right to live. And based on today's announcement I can see that, that particular right is way, way down on their list. They would much rather be spending it on rail and roads and Scott Base."

Now he worried that patients in tough situation and without the necessary funding had lost all hope.

"The only thing that they can do is look to shift overseas in order to live."

In a statement, Pharmac said it welcomed the $200m increase to its budget.