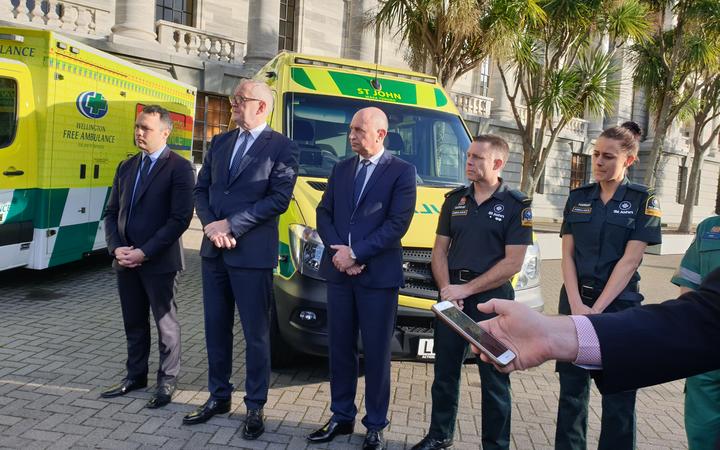 The Coalition Government today announced there would be a one-off funding injection for road ambulance services in the Budget next week.

It's also committed an extra $17.2m over four years in extra operational funding.

That's on top of the $190m of funding for the vital services from the government year-to-year.

The government currently funds 72 percent of the costs of the services provided by St John's and Wellington Free Ambulance.

Health Minister David Clark told reporters outside Parliament today that services had come to the government halfway through a four-year funding plan.

Dr Clark said: "Obviously we're two years into that four-year funding agreement and they've come to us to say, actually the nature of their business is changing, the pressures are greater than they expected when they signed up to that four-year path. They've called out and we've listened to their call and responded appropriately."

He added the work of the services was valued by everyone, and the government wanted to give them the confidence that their funding concerns were taken seriously.

St John chief executive Peter Bradley said government funding would remain at 72 percent under the boost, and services would still need to retain partial charges for patients, donations and fundraising.

But he welcomed a government commitment to improved funding following ongoing reviews. He said it "sends a strong signal that government has listened to our serious concerns and wants to support the growing demand on our services and the valuable skills and innovation we provide".

He told reporters that further reviews under way now will lead to a further boost.

"Well we hope that the speed that the government has announced in terms of the reviews that they're going to undertake, one review on our finances and operating arrangements and one report back on the future of the ambulance service, commissioned to be undertaken in the next six months or so, we believe that signals to us a commitment to solving this sooner rather than later."

"We know there is an issue around their long-term sustainability. It's a quirk of our system that they're only partially funded," Ms Ardern said.

Mr Bradley added that the one-off Budget lift would relieve some immediate pressures such as moving the 111 Clinical Control Centre staff out of a leaky building and into a better space. 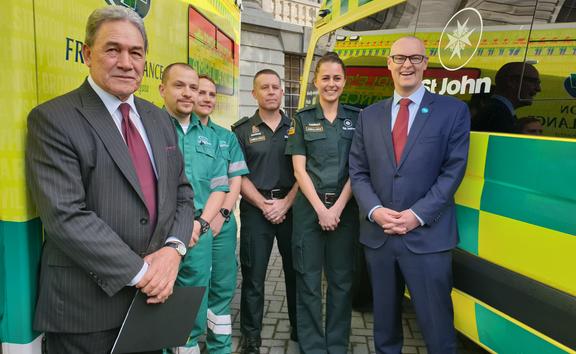 He added that the funding problem was an "historical issue" for at least 50 years and no new government was going to fix it quickly. Mr Bradley said he believed 95 percent of government funding was needed, and if it was not achieved, services would need to be reduced to match funding.

He would not comment in detail on ongoing industrial action with unions, saying they were in confidential facilitation and St John hoped it would be settled as soon as possible.

Deputy Prime Minister Winston Peters said ambulance services were vital throughout the country and to tourism. He flagged a further major funding rise in the near future.

"I am very confident that we can look forward to a day and not very far from now when 95 percent of the needs of St Johns is being funded from central government," he said.

"That would be fair and right and reasonable. And for God's sake it's probably ... one of the most essential services we've got."

Chief executive of Wellington Free Ambulance Mike Grant said the boost would enable it to buy another 24-hour ambulance for the Wellington region.

Wellington Free will receive an extra $850,000 in each of the next two years under today's Budget boost, while St John's will receive $14m more next year and $7m more the year after.