A publisher of building magazines says the dropping of duties and tariffs on construction products will knock only about 0.7 of a percentage point off the total cost of building a standard new home.

As part of the budget, duties on plasterboard, reinforcing steel bar and wire nails and tariffs on building products like roofing, cladding, insulation, paints, electrical and plumbing fittings will be removed temporarily. 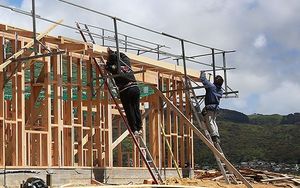 The publisher of the magazine and website, Building Guide, Mark Graham, said building costs in New Zealand were among the highest in the world, and the Government's trying to reduce those costs.

"I think there will be ramifications, both good and bad," he said.

"You'll see some costs come down (but) not much for the actual consumer, at the end of the day.

"They're estimating a saving of around $3500 on an average house-build. That only represents about 0.7 percent of the cost of building a house".

There would be an impact on the balance of payments for the country, and on local manufacturers of products such as plasterboard as they struggled to compete with imports.

There were opportunities for cost-savings by reducing the tariffs - but local manufacturers might be affected, including those turning out aluminium joinery, kitchens, granite bench tops, timber, weatherboards, and steel roofing.

"The additional competition will be offset somewhat by the fact that there is increased activity and demand for products - especially in Christchurch and Auckland - but that will filter though to the rest of the country.

"In the medium term, it won't affect them too much, but at the next (economic) downturn, they will really feel the impact," said Mr Graham.

The reduction in duties and tariffs from this initiative would reduce Crown revenue by $27.8 million over five years and had been provided for in Budget 2014.

But the Government said the savings to the residential construction industry will be considerably larger at about $75 million a year.

An analyst says temporarily suspending anti-dumping duties on building products, including plasterboard, probably won't have much impact on Fletcher Building.

Fletcher Building has more than 90 percent of the plasterboard market in New Zealand and these sales account for between 8 and 10 percent of its earnings.

Forsyth Barr analyst Andy Bowley said the removal of the duties could impact the competitiveness of the plasterboard market but any near-term impact was likely to be muted by the strength of Fletcher's GIB brand.

Mr Bowley said Fletcher is already under pressure from increased competition with the market entrance of Knauf, the world's second-largest plasterboard maker.

However, the Knauf product has proved slow moving in Christchurch after being awarded a government procurement contract.

He said although plasterboard imports don't require any kind of certification in theory, in practice builders are unlikely to use an untested product.