A large sinkhole has closed down part of Canada's capital and forced the evacuation of businesses just a few blocks from the country's parliament.

Photos and video posted on Twitter show water flowing into a hole that stretches across what is normally a busy downtown Ottawa street. 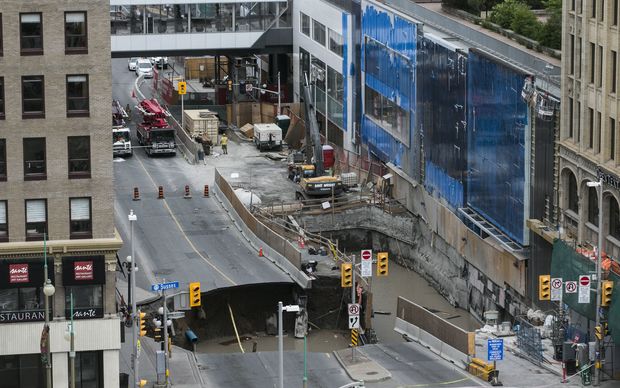 A large portion of Rideau Street, next to a shopping mall in downtown Ottawa, caved in and cut power to a majority of the city. Photo: AFP

Officials said earlier gas and water leaks had been contained.

The smell of gas in the area prompted the evacuation of nearby buildings, which remained closed, including the nearby Rideau Centre shopping mall.

A power outage in the area was also reported, affecting about 850 customers, according to Canadian media.

The area had been under construction for work related to Ottawa's new light-rail transit system. Officials said it was unclear whether that was the cause of the sinkhole.

There were no reported injuries, but officials have advised people to avoid the area until further notice.

The sinkhole appeared just three weeks before Ottawa was due to host the June 29 "Three Amigos" summit of the leaders of Canada, Mexico and the United States.