Police have yet to decide if a man will be charged over a cake-shop crash in Whangarei that has left a woman badly hurt.

The 39-year-old woman suffered serious leg injuries yesterday when a small car shot through the open doors of the cheesecake store in the Tarewa Road shopping centre.

The car smashed cake cabinets and pinned the woman and her young daughter against the counter. 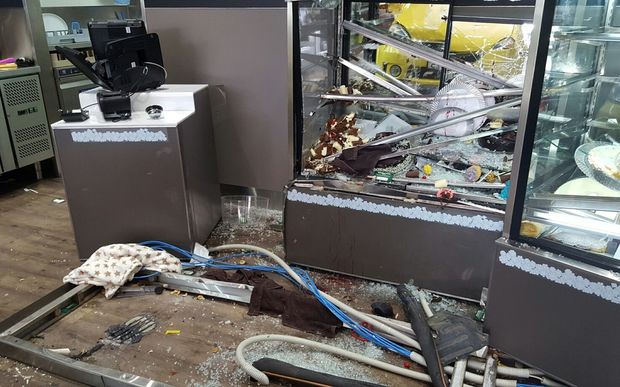 The cake cabinet inside the store was crushed in the crash. Photo: Lois Williams

The woman is now in a stable condition. Her 5-year-old daughter suffered minor injuries and has been been sent home from hospital.

The driver of the car - a 73-year-old man - was also kept in hospital overnight but was discharged this morning.

Police said the man told them he was originally a passenger in the car, but was trying to move it to a shadier park when his foot slipped and somehow became stuck on the accelerator.